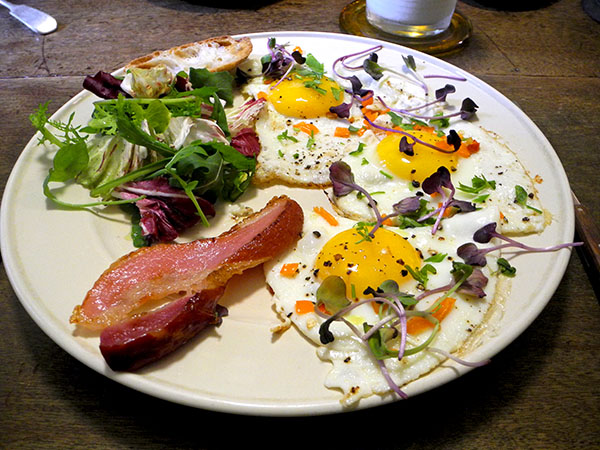 That bacon was as good as it looks. As was everything else, including the the eggs, which, for the first time in longer than I can remember, were not from a farmer at the Union Square Greenmarket, and [probably] not really local. While there on Saturday, I didn’t buy eggs, thinking I had 11 left in the refrigerator. Later I discovered there were only 5, so I headed down the block to Whole Foods and looked for something that might be equivalent to what we’re used to.

I don’t know how long they had been away from the hen, but the 6 large ‘Vital Farms Pasture Raised Organic Eggs‘, described as ‘From Family Farms Across America’ (thus my question about how local they could be) were very good! Maybe it also had something to do with the fact that the package was able to certify ‘min 108 sq ft’ for the ‘pasture raised standard / outdoor space per bird’ (hell, most folks’ offices aren’t that large).