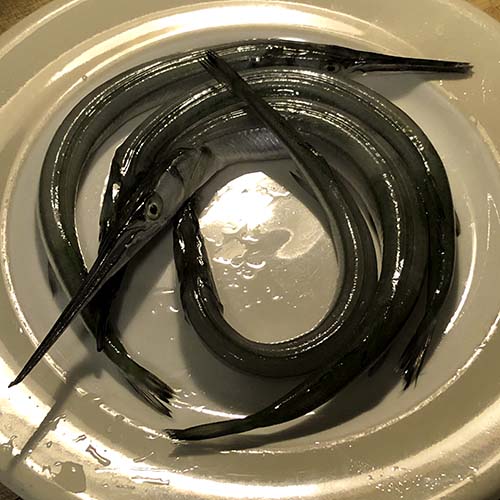 It’s not that I don’t appreciate the incredibly huge variety of local seafood available through the seasons from the fishers in New York’s Union Square Greenmarket four days of the week. It’s just that I’m an obsessive for anything new.

Yesterday, long after I made it home with a ‘catch’ that I had never come across anywhere, at least on the eastern seaboard, I began to doubt whether I would be able to bring it to the table in an edible form. 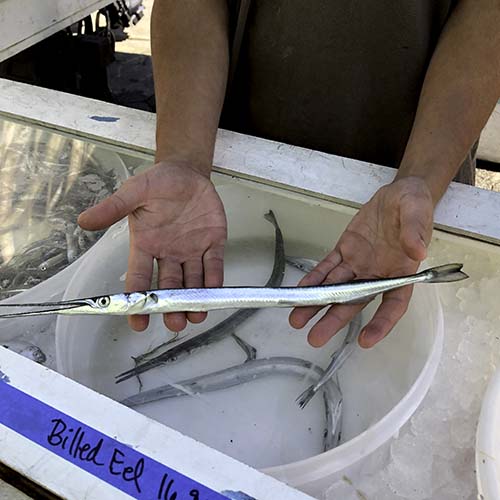 It was labelled, ‘billed eel” at the Seatuck Fish stand, but I was more than skeptical of the appellation. I know a little about eel, and I’ve prepared it both fresh and smoked, but these teethy silver pencils did not look at all like they belonged to the order Anguilliformes, and there was noting snaky about them.

I had already bought swordfish steaks for our dinner, so I deliberated with myself for a while about whether to go for these absolutely beautiful creatures in addition, I didn’t know what they were, they were so very small, and there were only four left (today I’m wondering who had bought the others, and what they had one with them). Eventually, deciding to take a chance, and thinking they might make an interesting small appetizer, I scooped them up.

Once home I began to do some research, first to determine what they were. A quick search for “long narrow small ocean fish” gave me the answer: I had four small Atlantic needlefish on my hands.  The second thing? Eating them wouldn’t kill you. Then I learned that they belong to an entire group of fish described as perfectly edible, even delicious, but, because of the bones, almost impossible to eat.

I spent an inordinate amount of time checking what that would mean if applied to my tiny quartet. Try searching, “how small a needlefish must you have before you can eat the bones?” Not surprising, I never found anything definitive.

So I cooked them.

In the end we were easily able to remove the backbones after the fish had been fried, and the ribs turned out to be so small that we never noticed them. Yay for optimal size! Thank you Catherine, Everett, and all the Seatuck folks!

We’d both recommend needlefish to any cook or diner with the considerations mentioned above, and the cleaning process was really sort of fun.

Many thanks to the people responsible for this reassuring video, in particular for the  portion showing the fish being cleaned, recorded in extraordinarily clear overhead images. Those needlefish are a little larger than the ones I had, and of course there were a lot more.

I want to repeat that the flesh was really, really tasty, and the prep made it possible.

For the guidance of anyone reading this, I should make it clear that we were very lucky in the size of the fish we were presented with. They were neither too small nor too large. Smaller might have made the gutting more difficult, and would probably have complicated the removal of the back bones; larger would have meant the zillions of rib bones would have made eating the flesh impossible, or certainly not an experience you would want to remember.

I write that with the qualification that really small would mean they could be fried without gutting them like any really small fish, as smelts, or whitebait (a collective term for the immature fry of fish), and the much smaller backbones might have gone down with the flesh; really large would have made it practicable to cut them into fillets, eliminating all the bones, as described in this video. 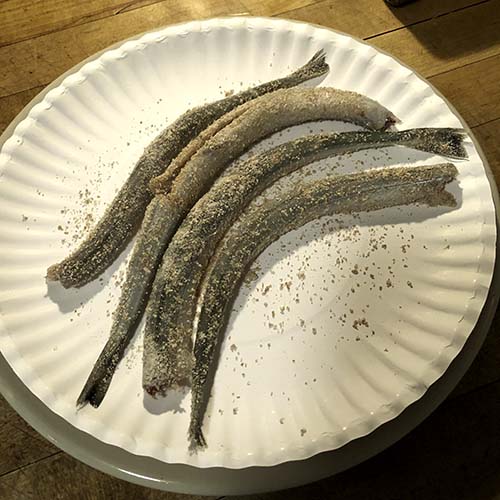 This site provides some simple, accessible information about Needlefish, including a simple cooking suggestion that became the basis for my preparation last night. 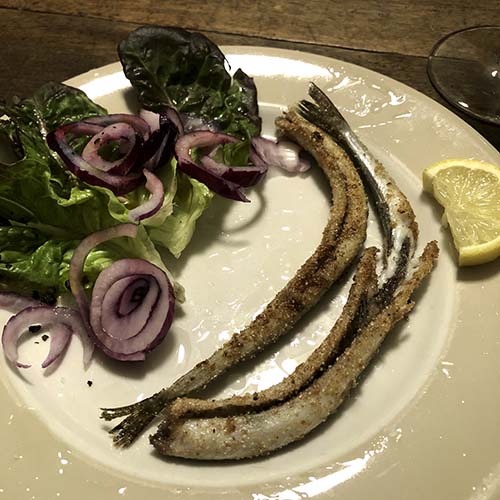 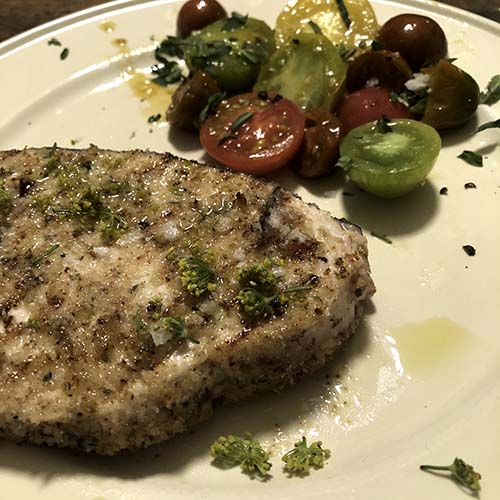 The main course was one we’re pretty familiar with, with elements that show up here frequently, always welcomed.