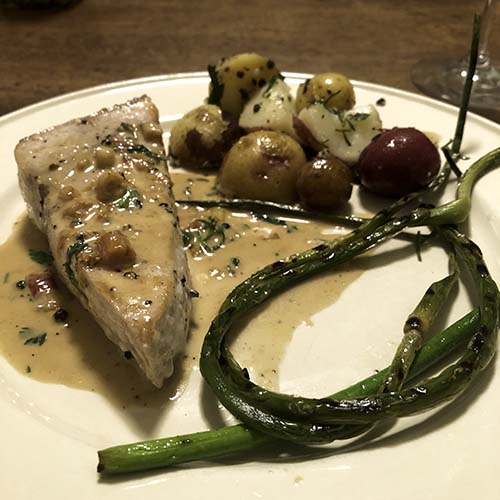 I have been neglecting this blog for months, first because I just got distracted by other stuff, and because I didn’t want to spend as much time on it as it demands. Then it was because of the additional perturbations that arrived early in March, those related to the pandemic, whose distractions were especially severe for those of us in New York.

And then near the end of May I burnt my left hand very seriously (2nd and 3rd degree, but now almost fully healed), and my calendar was suddenly even more full.

But it was a cooking accident, so at least I stayed on subject.

And I did keep cooking.

I quickly learned that preparing an ambitious meal with one hand requires a certain amount of kitchen experience, a bit of planning, some dexterity, and occasionally the opportunity of borrowing one or more of your partner’s limbs (I’m recalling me carving some sturdy, crusty bread while he was holding the loaf itself).

I’ve been making proper dinners for Barry and myself virtually every night, with the heroic assistance of the people working with GrowNY, everyone who made the Union Square Greenmarket safe and more vital than ever, and the many stores that were making home deliveries of goods I was unable to access in person. Our equally valorous doormen were lifesavers.

We are both extremely vulnerable to the virus, so my now one visit a week to the local open-air greenmarket was our only direct access to food supplies.

I think we only ordered pizza 3, maybe 4 times, in these 3 months, and some of the argument included wanting to support out wonderful local people.

We enjoyed a particularly enjoyable home-cooked meal last night, and it was also the first time the entrée, swordfish au poivre, had appeared on the blog, so it seems to be a good candidate for re-engagement [the recipe came from Florence Fabrikant, in the New York Times]

It was also a celebratory meal, as it marked the return to service of the hand that had been decommissioned over 3 weeks earlier and which had been wrapped in gauze until yesterday, but the recipe wasn’t complicated, and it might even have been accomplished with one hand.

There was a cheese course, 2 terrific goat cheeses I had bought that Wednesday from a new Greenmarket vendor, and I will definitely be seeking them out regularly 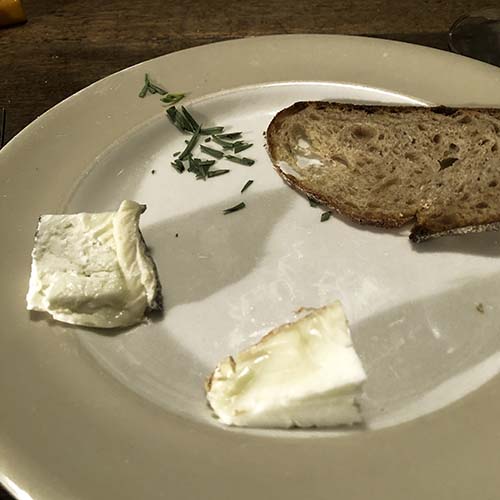