It was delicious, even if the photo reveals it was a little colorless. I’ve usually used tomatoes, in fact usually bright red tomatoes, when I’ve roasted whole skate wings, and I did bring home some small golden cherry tomatoes that afternoon, but in the evening I remembered that I’d been hoarding some tomatillos, which are nightshades, but not tomatoes, for a couple of weeks. I checked them out and found that they both looked and tasted as good as when I had worked with a few on the previous Sunday, so I decided the familiar recipe could handle a change in one of its major ingredients.

The tomatillos had been purchased at the Union Square Greenmarket on October 14, over 2 weeks before I finally incorporated them in this meal.  Until I looked into their storage life expectancy on line the next day I had thought my experience represented an extraordinary survival, but nature often knows how to pack her things, and in this case her design, the dry, leafy husk in which they are wrapped and to which they remain attached until ready to be used, did its job well; also, I had kept them in an open paper bag in the crisper, and I talked to them regularly.

The other novelty that was a part of this meal was the herb rue, today more celebrated in literature and scary medical accounts than found in actual food preparation. I’d seen it before in the Union Square Greenmarket but had always passed on it, but the little bunches I found at the Stokes Farm stand on Friday finally won me over, after briefly checking the internet information my phone to see if I would be likely to find something to do with it.

The results were conclusive: It was positively super on plain boiled potatoes, a very pungent, very unusual and tasty flavor I expect to enjoying more in the future. 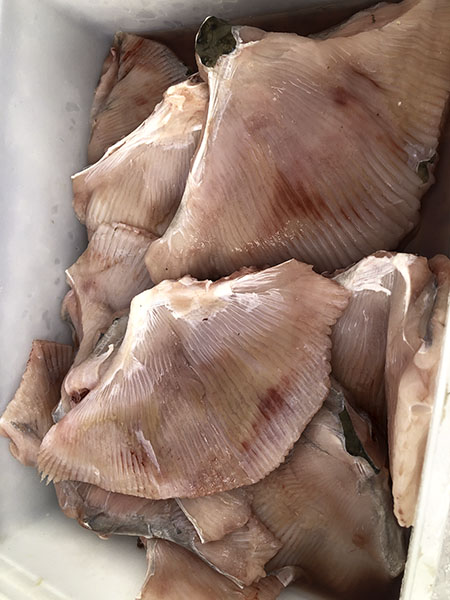 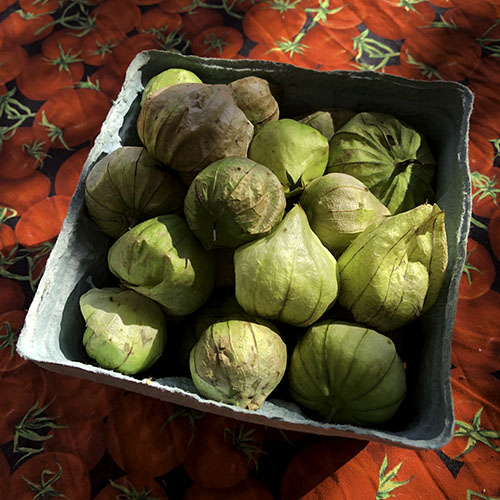 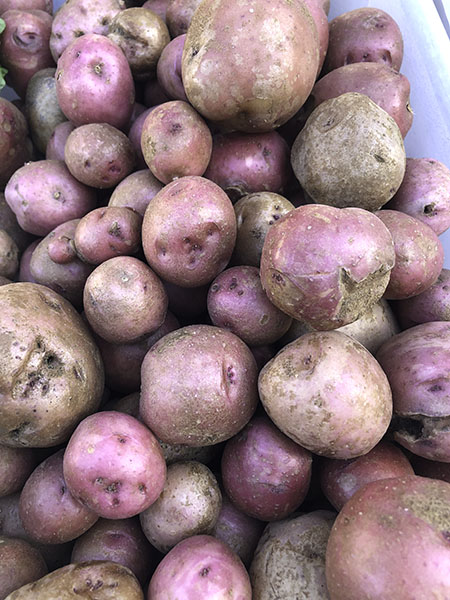 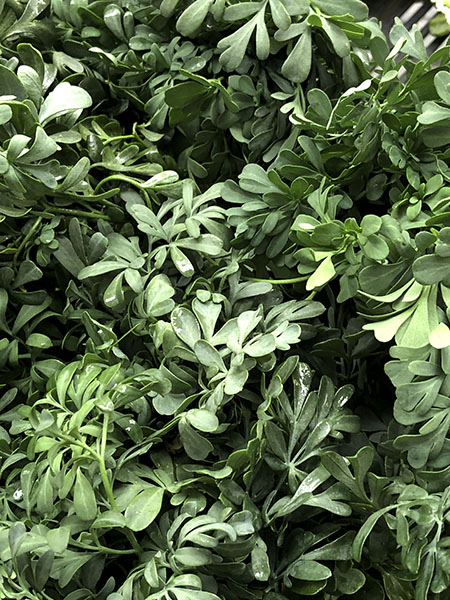 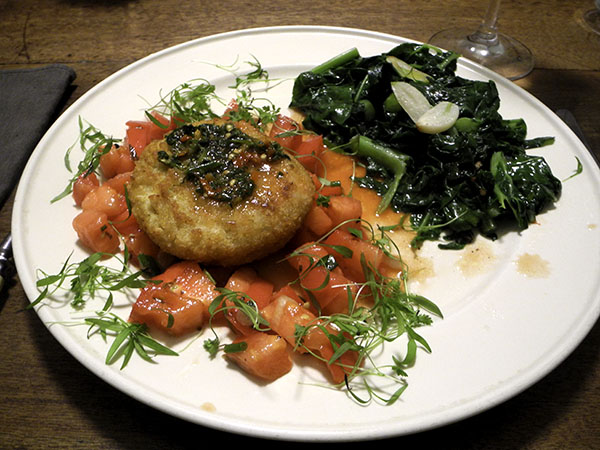 I didn’t get to the Union Square Greenmarket on Monday, so while I missed the P.E. & D.D. Seafood stall, that night I rewarded us both with a meal that included a pair of their crab cakes made inside their home by Delores Karlin, wife of fisherman Phil Karlin, that I’d defrosted earlier in the day. 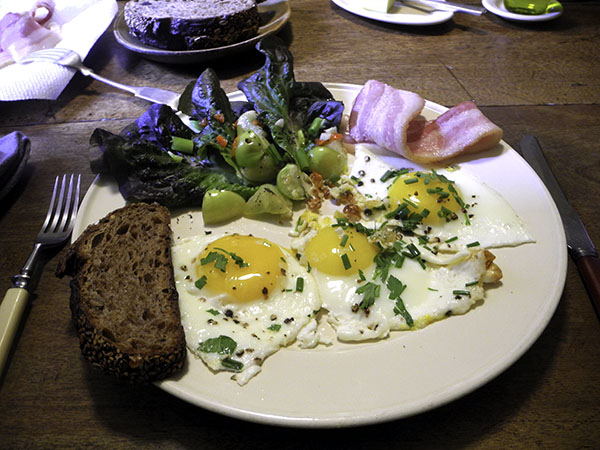 After last week’s detour through a one-stop condiment arrangement involving some homemade Zhug, today I went back to assembling a lot of separate things in little bowls for our traditional Sunday bacon and eggs early afternoon meal.

It was a lunch of consequence.

It included, not necessarily in any order: 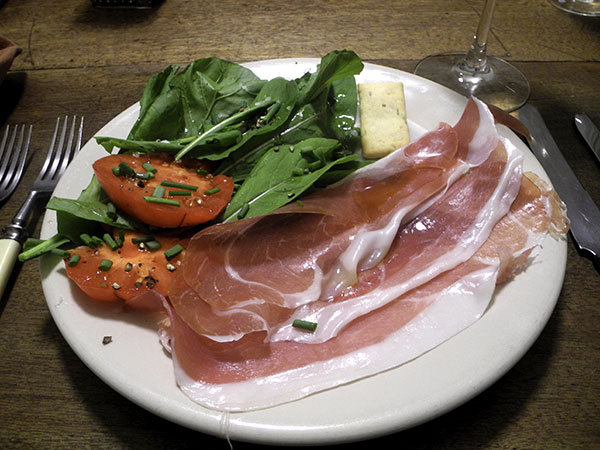 There was a somewhat meaty first course and a vegan main, although since the flavors were so rich,  Barry had to ask me whether meat had any part in the latter. It did not, so I think the suggestion of it came from the savoriness of the habanada pepper, the smokiness of the toasted pine nuts, and/or the earthiness of the micro kale finish.

The antipasto, or the appetizer course, was more southern Italian than the next one. 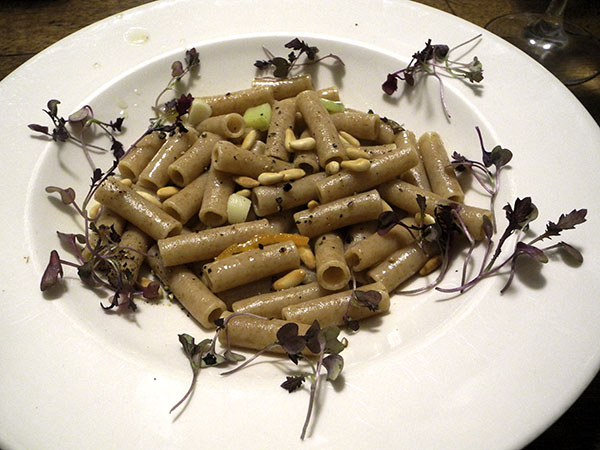 The primi, or main, in this case, to the extent that it echoed Italy at all, was the more northern Italian of the two.

There was nothing new in this entrée, except, I believe, for the greens, which were some kind of kale/mustard combination of which I didn’t get any description from the farmer the day I picked them up.

They were quite sweet, and delicious, with much of the flavor of mustard, but with little of the bitterness (which I actually like). Barry described them as “the habanada of mustard greens; all the flavorful goodness, but without the bitterness.

We were happy that the swordfish steak was a little larger than our usual share, because it was really, really good, and so were the very ripe tomatoes from which I had trimmed some portions that had gotten a bit too ripe. 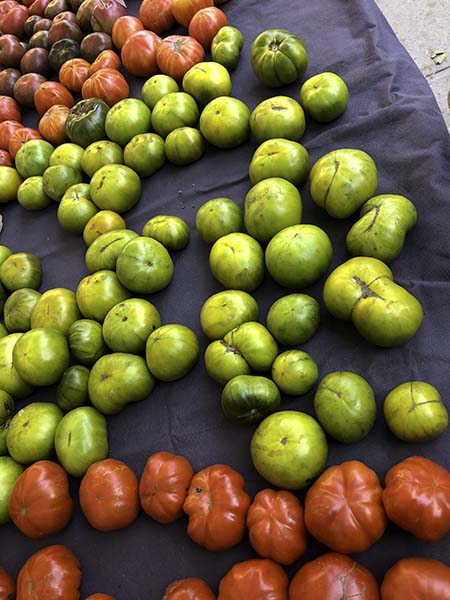 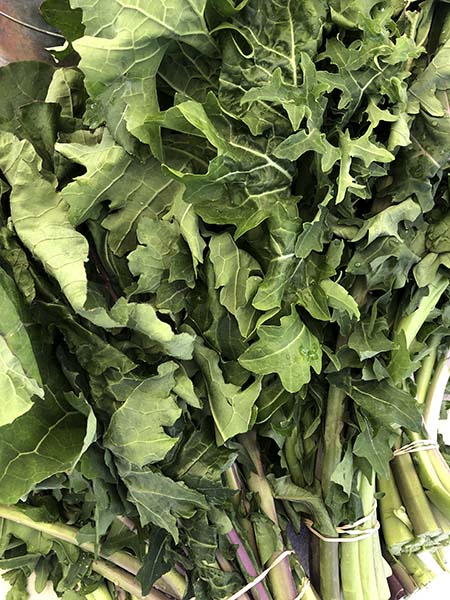