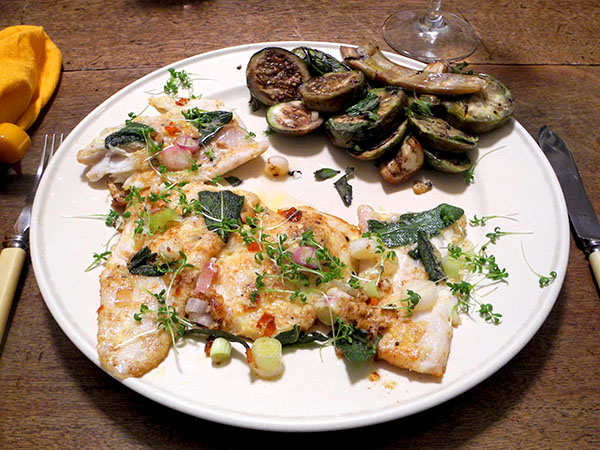 I think I sometimes take flounder too much for granted. It’s easy to cook, and it’s something of a blank slate; It’s lean and somewhat flaky, with a firm texture; it has a mild sweetness, and it can be cooked with the lightest of sauces.

But this time I had to bow my hat to Paralichthys dentatus (or maybe to pseudopleuronectes americanus, since I wasn’t told whether I was buying Summer Founder or Winter Flounder, and I didn’t think to ask Jan while I was at the fish stand): I managed to take home 2 splendid, very fresh fillets yesterday (one, slightly thicker than the other, from the top of the fish, and one from the bottom), and I totally lucked out with the combination of ingredients I found to enhance it.

I’ve read that if you really wanted to appreciate a very fresh white fish, you should try poaching it and serving it with only a bit of salt. I don’t have that restraint, and besides, I have access to so many fresh herbs and seasonings that deserve some appreciation as well.

I’m going to want to revisit this very specific dish again, probably as often as I find I have all of the elements that went into it. It was superb.

The allium was a particularly sweet Japanese scallion. 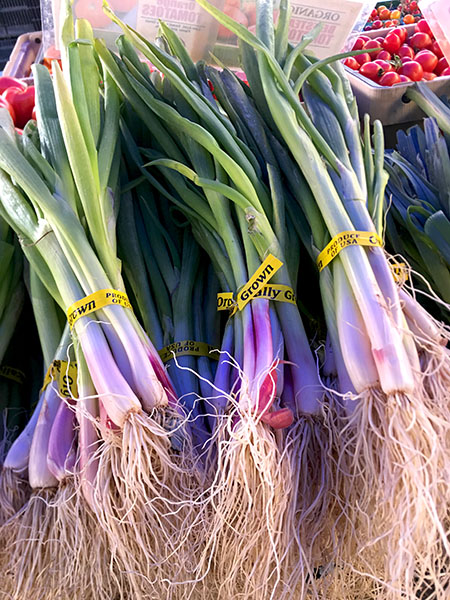 The vegetable was assembled from two sources (I didn’t have enough left in the refrigerator for a meal, so I bought a few more that day). 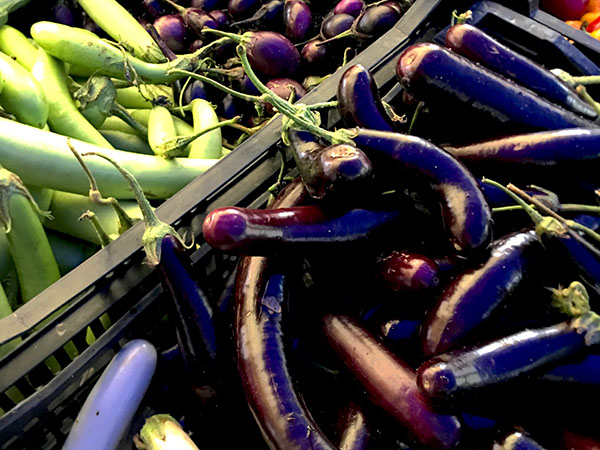 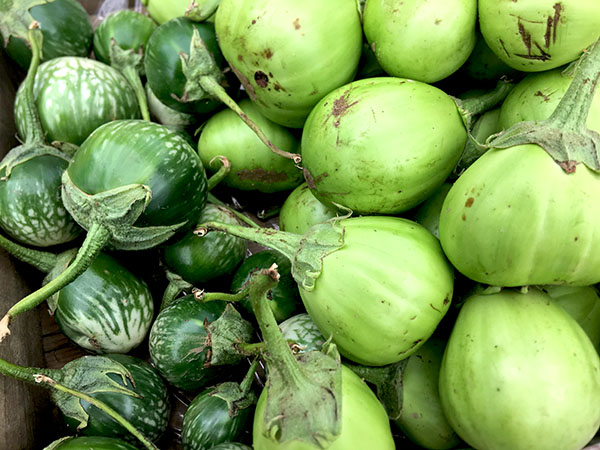 The dessert was the simplest – and sometimes the most perfect – ending to a meal, a bowl of local grapes that had just been washed in icy-cold water. 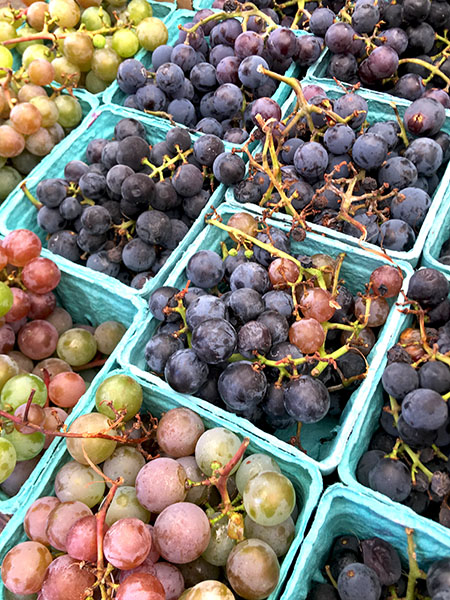 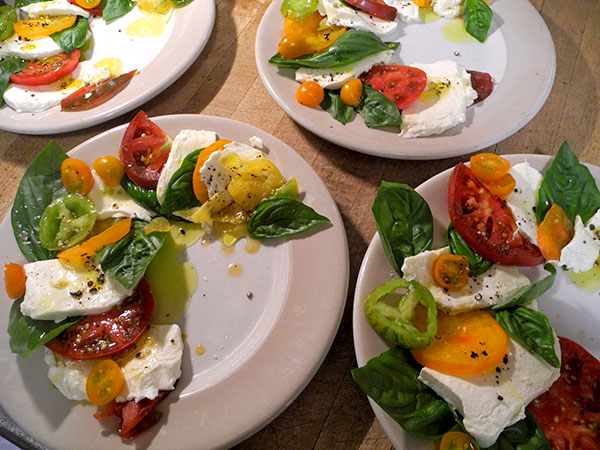 There were 4 at dinner again. The first course repeated the one served the last time, with a tweak from tradition in the insalata Caprese tomato choices.

Also as with that meal, there would be 3 courses, and I was again determined to make the main course something that could be prepared easily enough for me to be a part of the conversation even before we sat down.

When I need to cook enough for 4 people, many fish entrées (and seafood was virtually a given, especially since it was summer) take up an area larger than the surface of any of my pans. The best solution is to pick a fairly thick fish, like tuna or swordfish, or…

Once I spotted the beautiful bucket of striped bass (‘striper’) nestled in a tub of ice at the fishmonger’s stall that afternoon, I knew I had half of my main course picked out.

This great, most American of fish had threatened to disappear from our waters only 30 years ago, but was rescued by the heroic efforts of many good people, mostly fishers, during what some call the ‘Striper Wars’.

This is the view I had of the bass at the fishmonger’s (the clarity of the image is slightly obscured by the scratched plexiglas hinged lid of the tub). 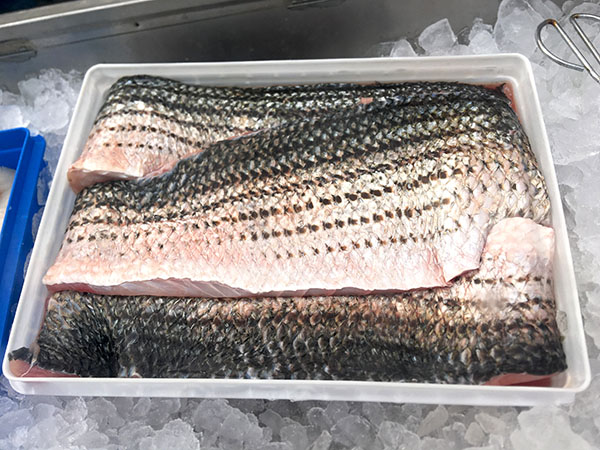 As in the week before, I picked the vegetable for its simplicity, and especially for the fact that it could be prepared ahead of time (in the end however I didn’t actually do it in advance). Also, Barry loves Tuscan kale.

We started, as usual, with breadsticks and a ‘sparkling’, this time a very nice French un-champagne.

The antipasto was an insalata Caprese [see image at the top], which always takes longer to assemble than I expect it to, but it’s worth it every time, since I only venture it when the ingredients are the best and freshest.

The main course plates looked simple, and everything actually was pretty simple. 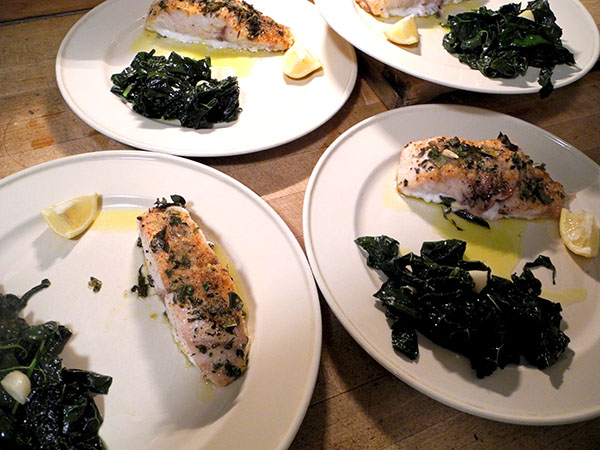 If there was any complexity in the preparation of the bass, it was only the number of herbs I tossed on top. I knew ahead of time what I was going to do, cobbling it up on my own, with the intention of letting the fish itself be the star. The oven timing was unknown territory however; in the end I used the ‘insert sharp knife in center’ and ‘bounce finger on top’ tests.

Yes, there was an oven involved. I try to avoid turning it on in warm weather, but it would mean less stress, and last night it was pretty mild; there was even a breeze, and we sat at the table in the gallery dining table, away from the kitchen.

The addition of homemade breadcrumbs was an impulse, and it is certainly optional. I was probably thinking I’d like the aesthetic, and the protection that such a coating might offer. Whatever.

This is the bass on the kitchen counter.. 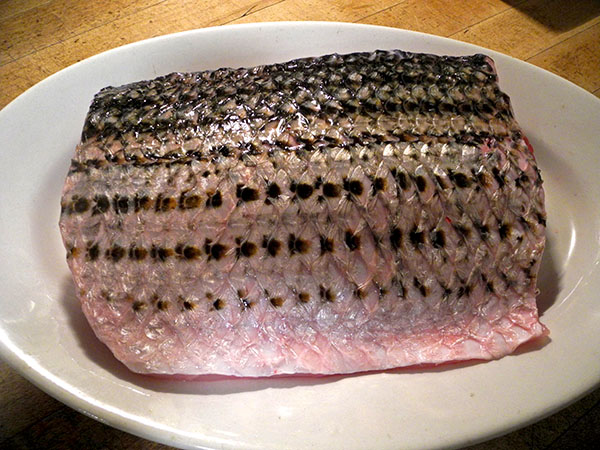 ..and this is the pan as it was about to be placed in the oven, but before the breadcrumbs. 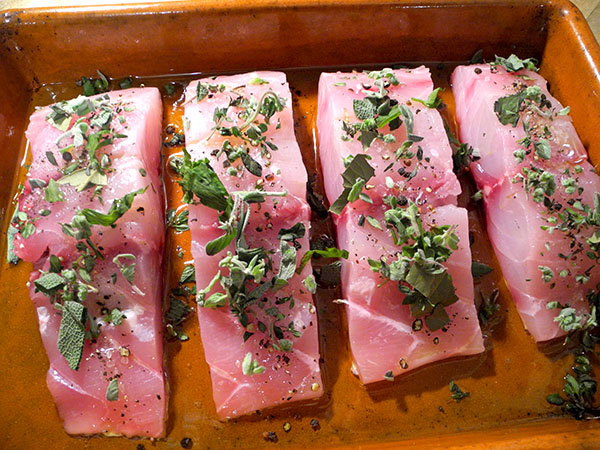 The vegetable served with the fish was one of our favorite greens, and it couldn’t be less complicated to prepare.

The dessert was berries and cream, ice cream. 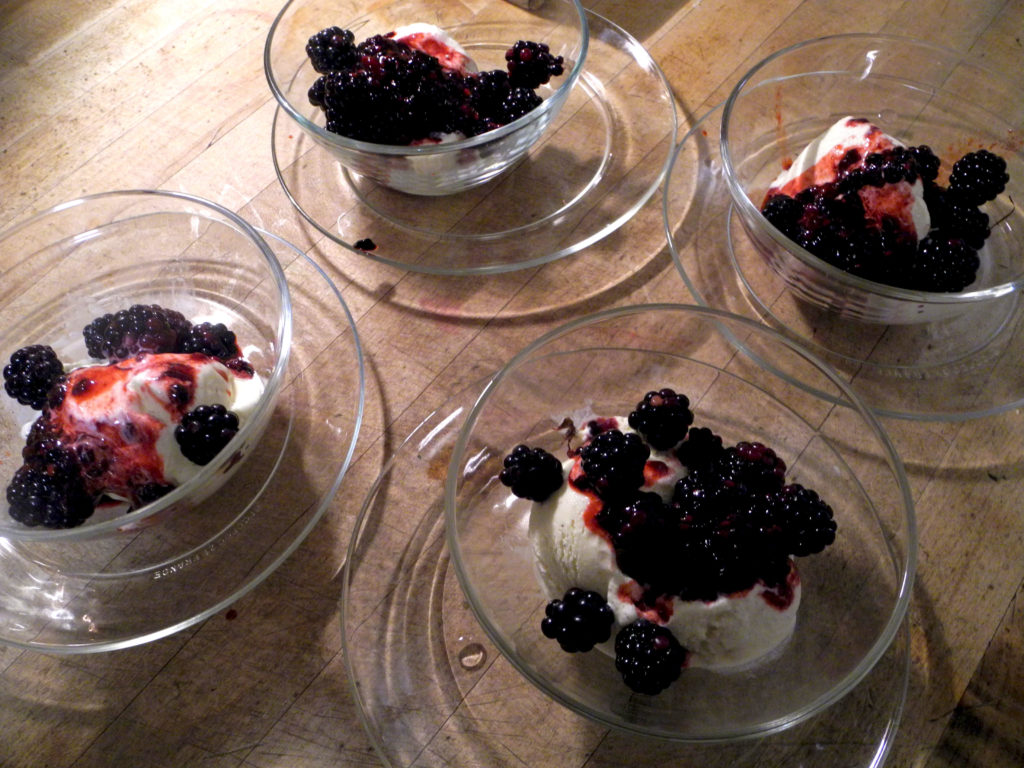 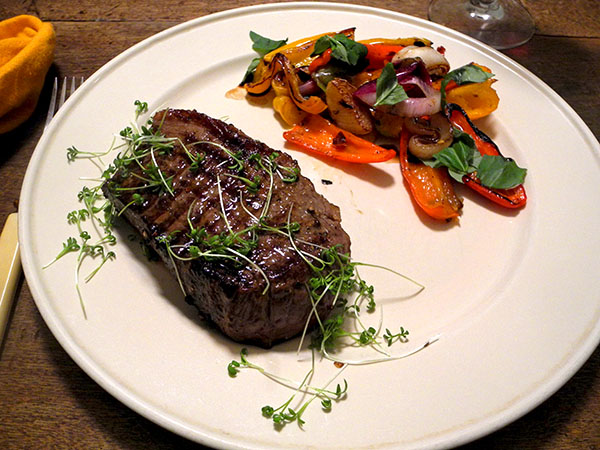 We’ve been enjoying this cut for many years [the history]; it’s become one of my favorite beef steaks.

I stopped in at Dixon’s in the Chelsea Market a week or so back, looking for two small steaks I might grill on top of the range to accompany a good vegetable. I was very happy to spot a culotte cut inside the shop which had been my source many times in the past. It weighed just under a pound; if I were to cut it in half, it would be exactly the size I had in mind.

Cut into two pieces, and vacuum packaged, I brought it home and froze it, and I’ve been on the lookout ever since for a good opportunity to enjoy these steaks – and also that good vegetable. 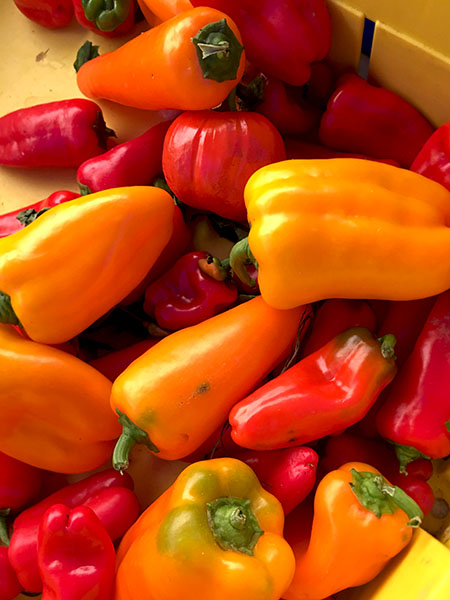 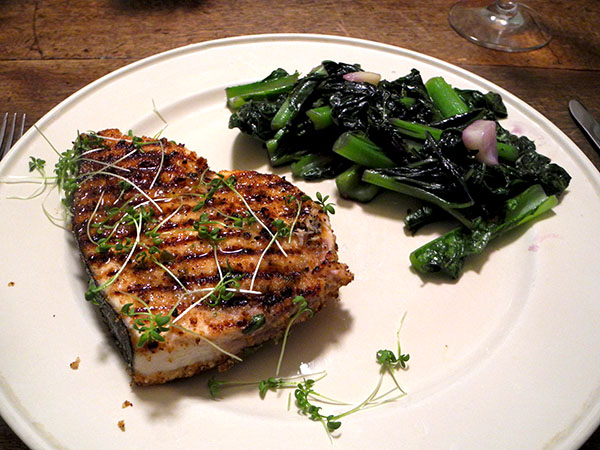 The swordfish itself, plus the recipe of course, and, yeah, my modest part (which was just taking it off the grill at the right moment) came together beautifully.

And then there was this incredibly good mustard. I had picked it because it would be quick and easy on a night when I didn’t have much time to put a meal together but it was much, much more than just a placeholder. 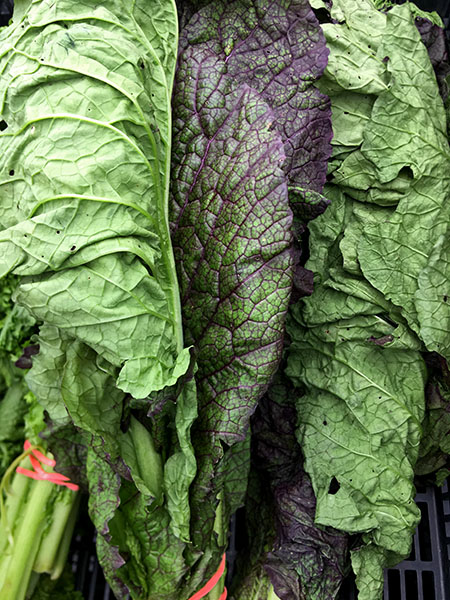 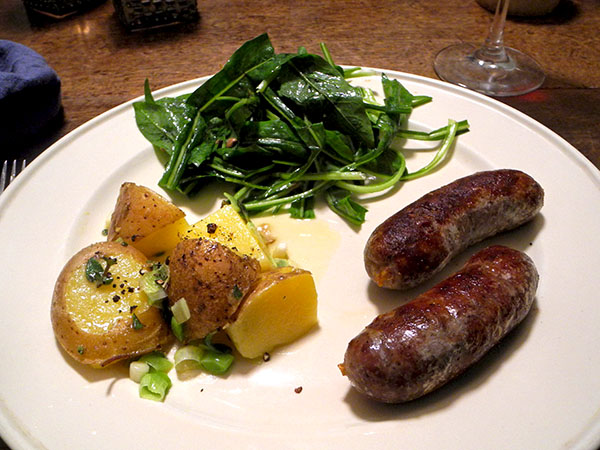 I would have picked a sausage from Schaller & Weber, since I love patronizing that wonderful Yorkville German food emporium, and Barry was going to be up there in the afternoon, but I was thinking of this as an Italian meal, mostly because of the puntarelle I wanted to serve, so it was the turn of our local Italian outlet, Eataly. 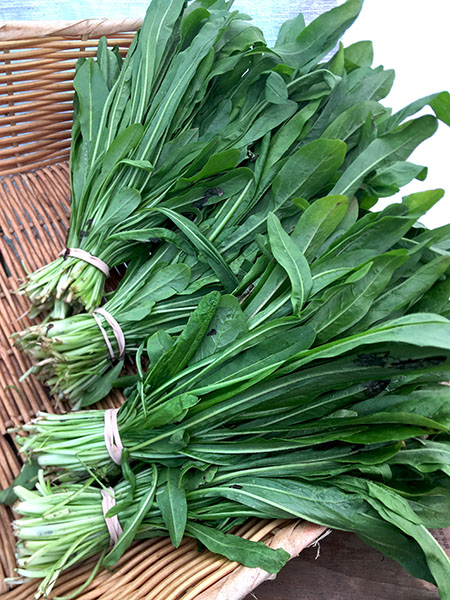 But then the very Germanic potato ended up as a part of the meal after all (although dressed with olive oil rather than butter). 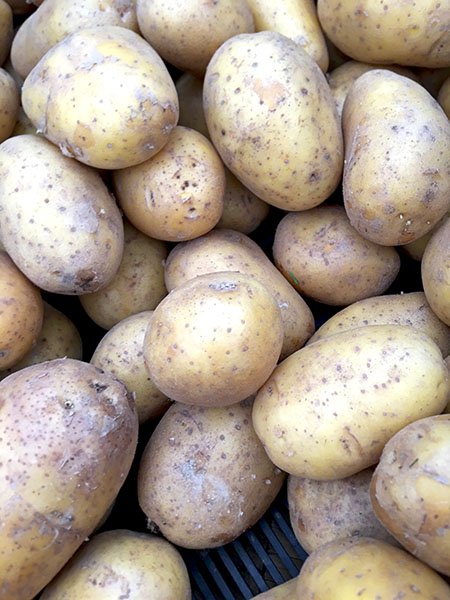