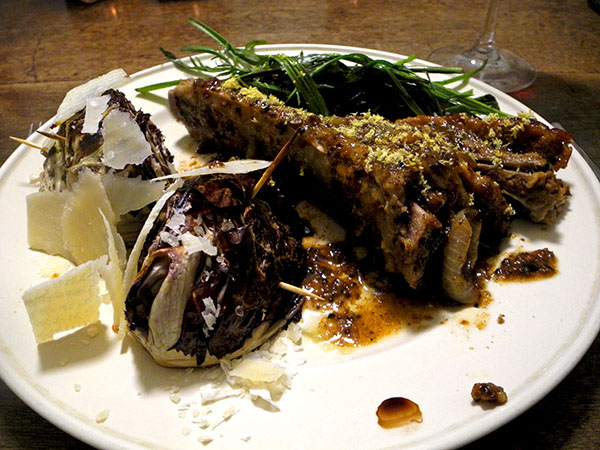 I’ve never cooked veal ribs before. Growing up, I loved my mother’s ‘barbecued spare ribs’, and I know I’ve cooked pork ribs a few times, but that was well before I began this blog, so I have no documentation. I did cook goat ribs some 5 years back, but that’s about it in modern times, so when I bought a neat package of veal ribs from Peter at the Consider Bardwell Farm stand in the Greenmarket, it was not without some anxiety: I had no idea what to do with it.

Thank the kitchen fairies for the internet! Not one of my hard copy sources, books or clippings, had a darn thing on this cut. While the Google results hardly jumped out of the screen (what I did find was complicated by the search engine’s unfamiliarity with the combination of the words, ‘veal’ and ‘ribs’), a few things eventually showed up. I excluded most because of complexity (one included dozens of ingredients) and for the estimated preparation time (as usual my cooking window was limited last night).

The preparation I chose to follow, mostly, was labelled, ‘Country Mustard Braised Veal Riblets‘; it had appeared in the Los Angeles Times over 25 years ago, and was waiting for me yesterday on line.

The recipe looked like a winner, and it was.