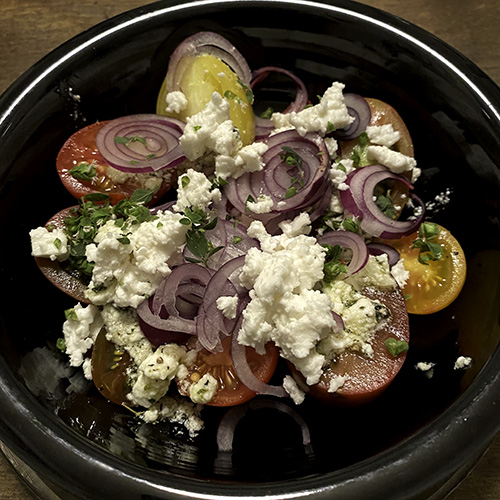 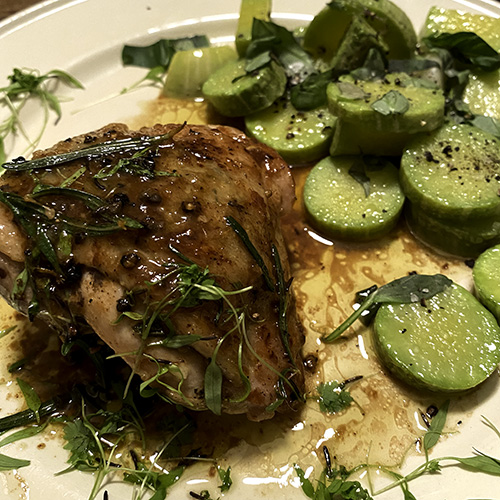 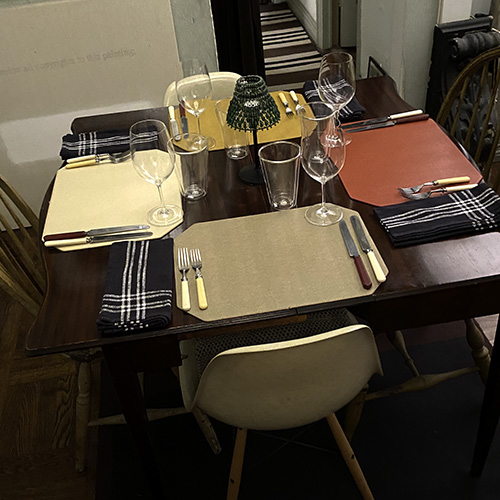 The table was awaiting the guests, but I had forgotten the genial service plates (very large, very shallow, very plain, clear glass) that I had found at a thrift shop long ago.

Aside from the fact that this would be one of the first dinners we would be sharing with friends since the epidemic began, the dinner itself would be an anomaly: The featured star of both the first and the second courses came from places other than our local greenmarket.

Our guests couldn’t join us on a Union Square Greenmarket day (Mondays, Wednesdays, Fridays, and Saturdays, year round) and I wanted to serve seafood, so early yesterday afternoonI I walked a few blocks west and south of the apartment to F. Rozzo & Sons. Louis Rozzo is a fourth-generation fish broker, head of a family business with a 121-year history in Chelsea. It was started by Louis’ Neapolitan grandfather in 1900, who bought the building in 1905, and serviced New York restaurants, eventually hotels and clubs as well, from a horse-drawn cart. Until recently, when the epidemic closed down virtually every one of his customers, 9 refrigerated trucks were doing the same duty as Felix’s cart; sadly, the single box van I see parked in front whenever I arrive is probably more than enough for his delivery needs today.

Louis began supplying retail customers when his customer base dried up early in the Covid epidemic because of restaurant, hotel, and club closings.

The shop now announces its stock each day with sandwich boards: 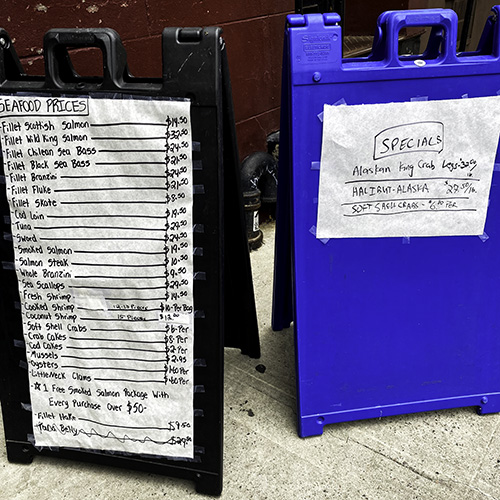 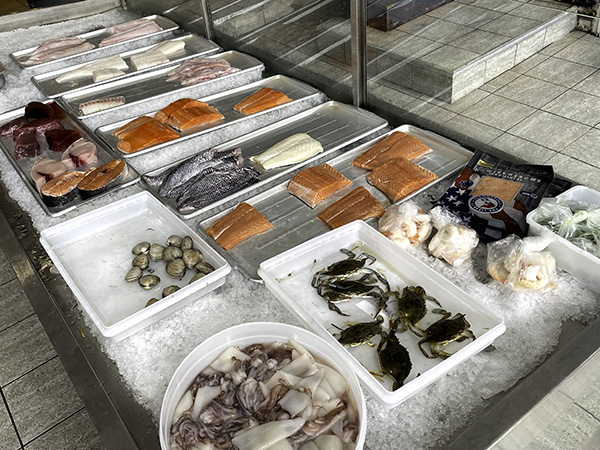 When our two guests had arrived for dinner, we nibbled on breadsticks and such, and enjoyed a sparkling wine, Apollonis “Authentic Meunier” Blanc de Noirs Brut, Loriot NV . 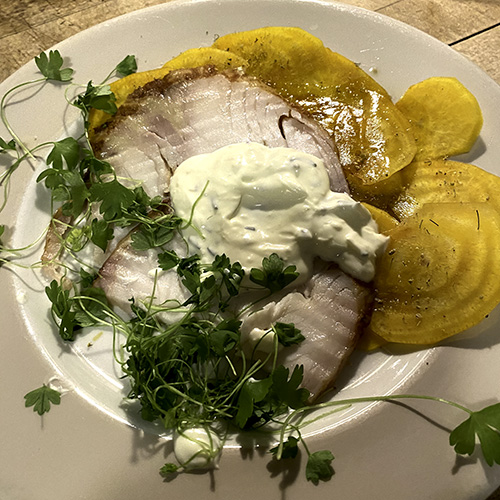 The first course was assembled with slices of smoked American farmed sturgeon (9 ounces total) from Grace’s Marketplace, placed on a bed of 2 small almost impossibly-thin hand sliced (I have a great knife) golden beets from from Phillips Farms, the slices first sprinkled with small amounts of wild fennel pollen from Buon Italia, dribbled with a good Cretan olive oil, and a little white balsamic vinegar, Condimento Bianco Barricato, the sturgeon itself topped with dollops of crème fraîche from Vermont Creamery (via Foragers Market), the cream having been mixed with lemon zest and chopped fresh za’atar from Rise & Root at the Union Square Greenmarket, the dish garnished with micro celery from Two Guys from Woodbridge. 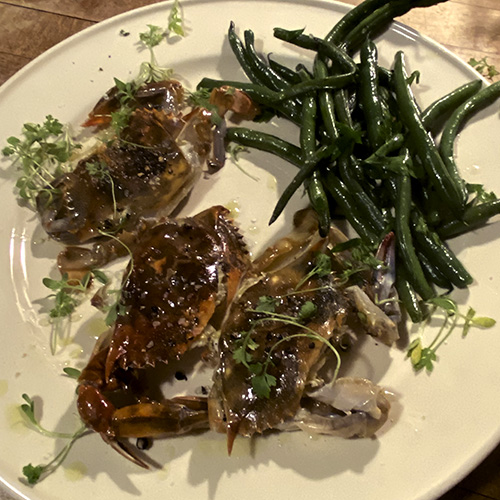 The main course was nine (traditional fishmongers’ eight?) 3 to 4-ounce Chesapeake Bay soft shell crabs from F. Rozzo, brought to room temperature while I  trimmed them; the fishmonger had offered to do the cleaning, but I wanted them to “save face” at least until shortly before they had to expire, I thanked Tom and told him I’d do it in the kitchen a few hours later.

The crabs were sautéed on both sides (bottom first, but in the end served with that side down) over a medium-high flame in a quarter inch of olive oil inside a beautiful large (18 inch) French seasoned oval steel pan, for about 3  or 4 minutes altogether, or until their texture went from soft to taut, removed and arranged on the 4 warm plates.

There they were sprinkled with local Long Island (P.E. & D. D. Seafood) sea salt and some freshly ground black pepper, drizzled with lemon juice and garnished with micro cressida (similar to but spicier than cress) from Rooted Family Farm.

Accompanying the crabs were sixteen ounces of haricots verts from Migliorelli Farm, stems removed, but otherwise left whole, blanched, drained and dried in the same pan over medium heat, shaking, then set aside in a bowl and refrigerated until the crabs were about to be sautéed, at which time the beans were reheated in a little oil inside a heavy medium size vintage well-seasoned cast iron pan, finished with sea salt, freshly-ground black pepper, and mixed with chopped parsley from Echo Creek Farm (the West 23rd St market).

The wine was a 2017 Ponzi Vigneto Chardonnay.

There was a simple cheese course. There are no pictures of the plates, but they were definitly pretty: triangles cut from a small (7 oz.) wheel of a Camembert-type cheese, “G.O.A.T.”, from West Meadow Farm and Dairy, served with cubes of Marmelada quince paste, from Portugal, and a sprinkling of micro red amaranth from BK Micro.

The wine with the cheese was Patrice Grasset Loire Valley Sauvignon Blanc 2020.

We had an unusual after dinner drink, but these are unusual times, an extraordinary Barbancourt 15 Yr. Rhum, from Haiti, to which we were introduced by a Haitian friend.  The image below is of one of the glasses (short, heavy, ca. 1840’s, pressed), but the picture is from an earlier meal, and the contents then were a Sardinian digestif. 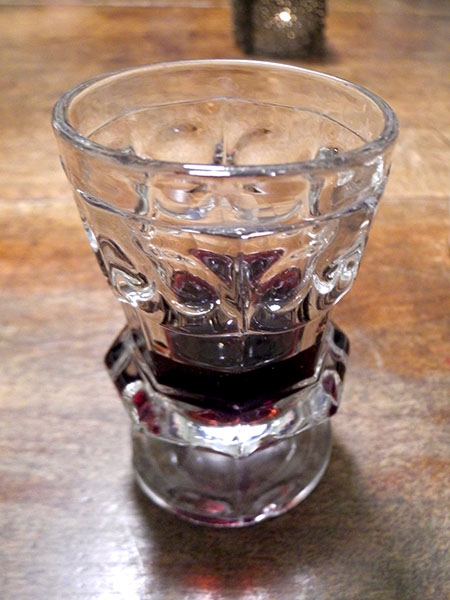 The music throughout the evening was from a “box set” (the equivalent of 6 CDs) of Haydn, ‘Music for Prince Esterházy and the King of Naples’ 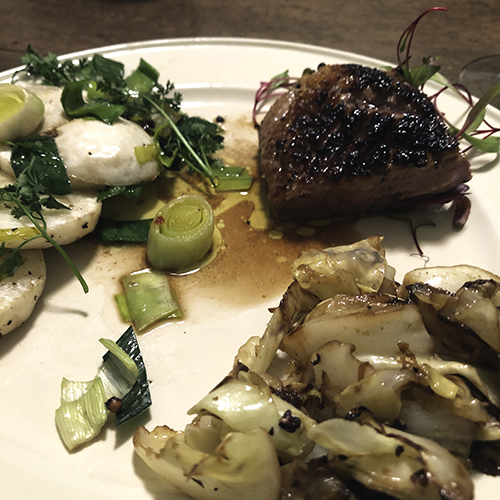 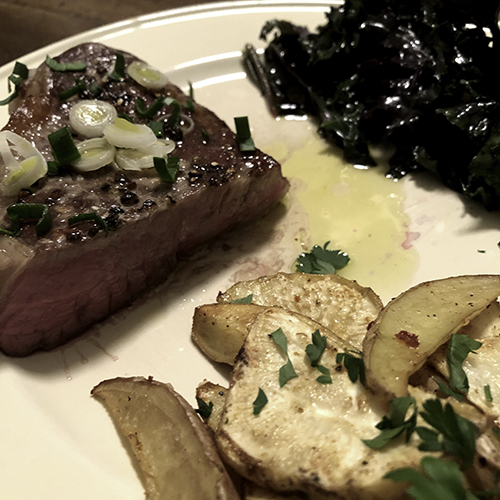 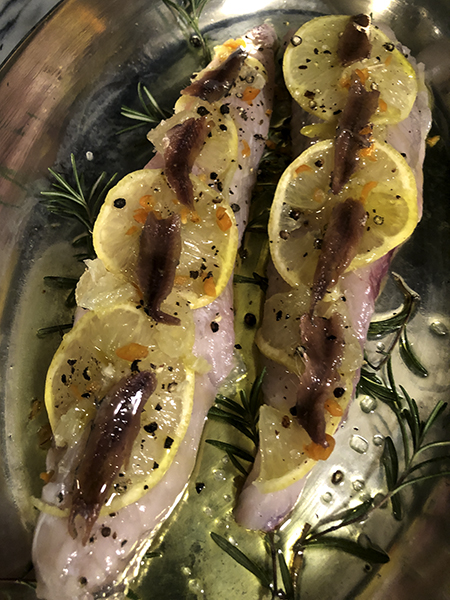 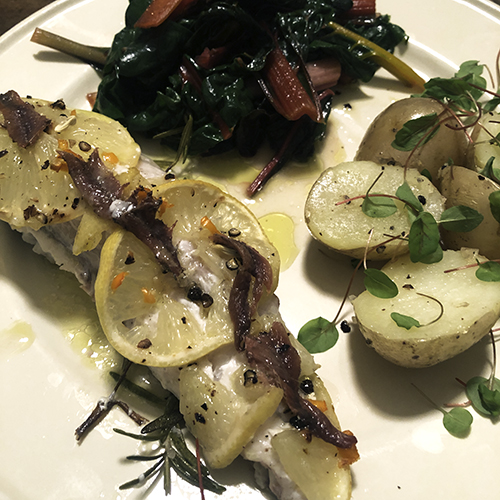