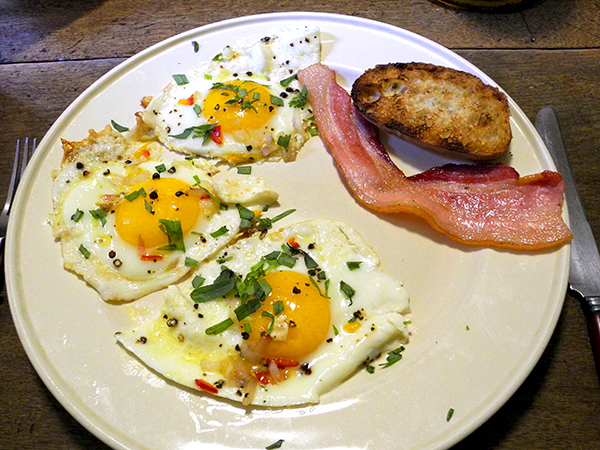 it was breakfast, but then pretty soon we realized it had also been lunch

It was 2:45 when I started to write this post (my computer then acted up, delaying its completion). I’d finished washing the dishes and was sitting with my first coffee of the day.  While at first we had been thinking of this as a breakfast meal, we had gotten a late start, late even by our Sunday standards. Now it will be called lunch, and even a late lunch, by the standards of most decent folks.

I love bacon and eggs, and I’ve loved both from the days I was first able to eat grownup food.  In our house, for my robust father, but not for my equally vigorous mother, grownup food at breakfast meant very fresh raw eggs carefully whipped on a plate with salt & pepper, the mix of whites and yolks soaked up with some good toasted bread.* This was also my own favorite breakfast (I think that my brother joined my dad and I in this idiosyncratic indulgence for at least a few years, but my sister definitely gave it a pass). Visiting relatives and guests may have remarked about it, but not until I was 17, and had arrived at college, did I learn just how weird most people thought my favorite breakfast was.

My father had died earlier that year.

Once I had my own small kitchen, in graduate school in Providence, I revisited my raw egg breakfast treat a few times, but, alone in my Benefit Street studio, the pleasure I had enjoyed in our breakfast room on Haverhill was gone.

I’ve run through much of the enormous range of egg treatments since then, and enjoyed all, but I always come back to some version of the eggs we enjoyed today, simply fried, with toast, and sometimes bacon.  Spiegelei.

Speaking of personal idiosyncrasies, my own alone this time, while finishing the bacon and cooking the eggs today I was juggling with the business of toasting the bread, but this time not with our trusty 1934 art deco Toastmaster, but using a device whose functions were somewhat more primitive, but no less effective.  I think I can also say they were more ‘toasty’, in a primitive, or ‘country’ way. 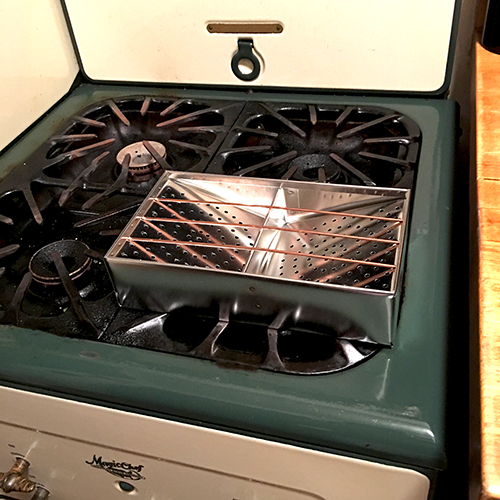 On the top of the burners of my 1931 Magic Chef, immediately next to the big 13″ cast iron pan I was using, I had placed a shiny new range-top, no-moving-parts, metal toaster box I had recently located on line. From a family-made manufacturer in Barrington, Rhode Island, it was identical to one I had purchased in a Newport ship chandlery in the late 60s and had used for decades before acquiring the Toastmaster at a Manhattan street fair. The ‘Camp-A-Toaster‘ has the natural advantage over most more elaborate devices of being able to toast slices of any thickness, but, for the survival of the toast, requires fairly close monitoring.

Still, it’s totally brilliant.  Thank you Fred (Fred Solomon was the inventor of the Camp-A-Toaster).

* Dad grew up with 17 brothers and sisters, on his Wisconsin family’s large ancestral dairy farm; while we always imagined the raw egg thing was about getting in a morning meal when there was little time and so much competition, it might have been about not wanting to ask too much of whoever was cooking, or part of an early 20th-century health vogue, and then it could also have been just personal taste.