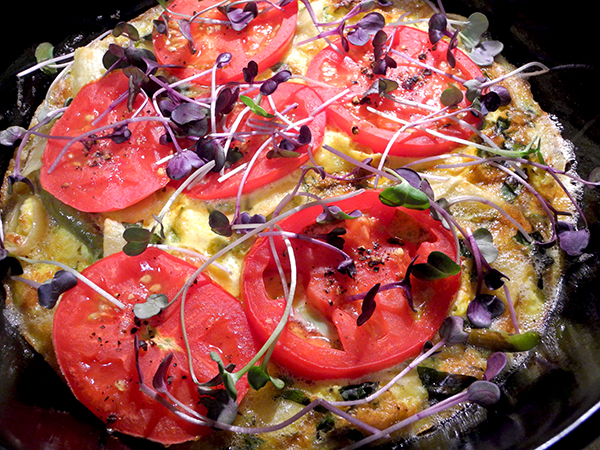 We like hot peppers, and we can normally take the heat, but earlier this week one variety new to us turned out to be far more fiery than anything we had experienced before.  Neither of us was able to finish a small appetizer plate of this pepper (something like a Padron or Shishito), which I had served as an appetizer for this meal, and then had to abort most of it. But I didn’t want to give up on those remaining on the plate, thinking at the time, if too much of a good thing is not so good, just the right amount of a good thing might be very good. I thought that the peppers should have a second chance, this time subsumed into a frittata with other, far tamer ingredients, making an ordinary dish more complex, and delicious, than it would be without them. I put the remaining peppers, as they were (already-sautéed and salted), into the refrigerator next to a small bowl of some plain, cooked penne remaining from another meal 2 nights before.

Last night it finally all came together.