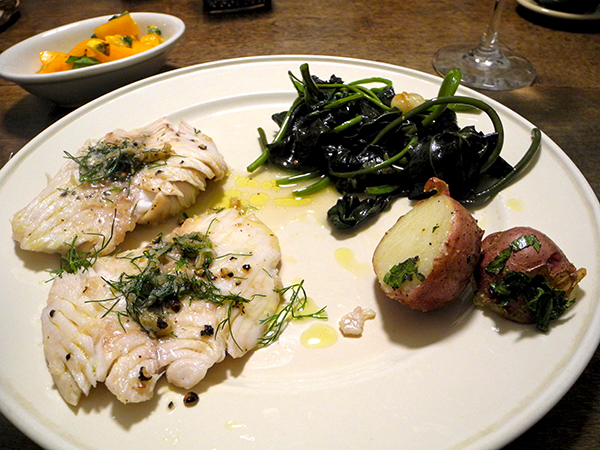 I was about to pick out a couple of gorgeous pink mako shark steaks at the Pura Vida Fisheries greenmarket stand when I noticed some beautiful triggerfish fillets in a bucket nearby.  Paul and his wife also seemed more excited by the latter, visitors found in local waters far more rarely than the shark. That fact, together with my memory of our having really enjoyed triggerfish on the one occasion I had prepared it, won the day – and last night’s meal. Triggerfish it would be.

By the way, triggerfish is subtly sweet (they dine on crustaceans) and the texture of the fillets alone would put it in a class by itself: unlike that of any other fish I can think of right now, the flesh is both quite firm and beautifully flaky when cooked properly. The picture above suggests as much, but out of sight is the ease with which I was able to run the fillets over, and then remove them to the plates. 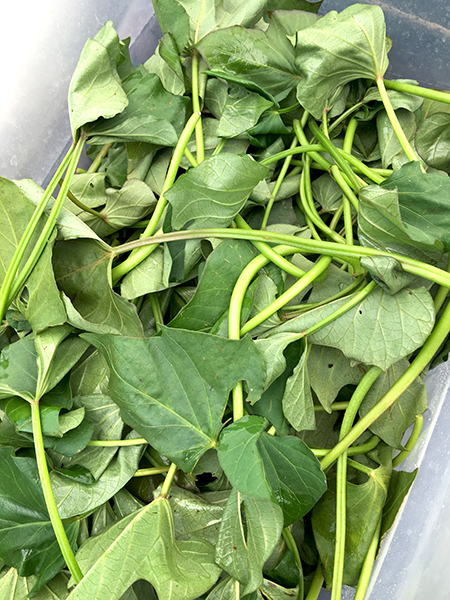 The sweet potato greens however were entirely new to me. I had tasted them raw at some time in the week before, and I thought they were pretty wonderful, but that moment I had already bagged all the vegetables I needed.

On Friday, as soon as I spotted these beauties I knew what I would serve with the triggerfish. They’re probably delicious in almost any state of cooking, from raw to par-boiled and sautéed, and I’m going to try to find out for sure whether that’s the case, with what I expect will be repeat purchases. My only concern would be dealing with the stems, since they don’t soften as quickly as the leaves. On the other hand, a certain amount of chewiness isn’t really a problem for me.