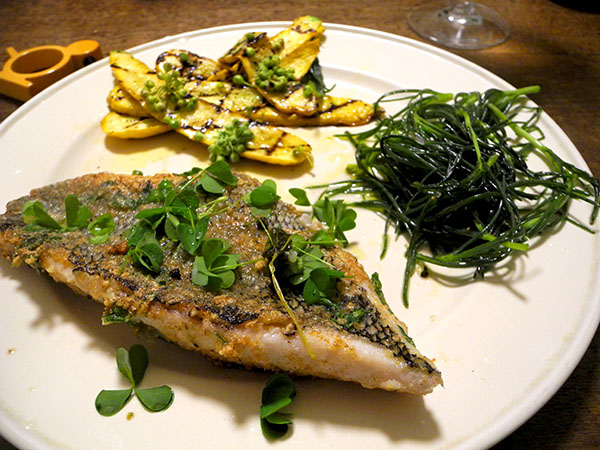 Hyperbole.  Yes, this will sound like hyperbole, but, supported by the fallibility of memory, I mean it: This was the best fish I have ever tasted.

Note: along with everything else it had going for it, there was just the right amount of crustiness to the bass when it arrived on the plates.

The meal began with what I had assumed would be a pretty ordinary mix of tomato and a bitter green, and in fact I had decided to add it to the meal mostly because I had one special yellow heirloom tomato that had been a little bruised on the way home from the Greenmarket the day before. It didn’t make sense to include it on the entrée plate with another yellow vegetable I was anxious to serve with the fish, so I called up some arugula and some spicy basil and made room for a starter (the two red cherry tomatoes were an indulgence on the side of more color).  That course too turned out far more delicious than I could have imagined. The colors were great fun, but the taste was pretty marvelous.

In each case it was the quality of the ingredients that did it, but in the case of the bass, there was an extraordinary novelty this time, buds of the common milkweed. Beyond that, it was certainly also about the very simple Mark Bittman classic sautéed white fish fillet recipe, one with which I have become increasingly familiar and, I guess, judging from the results this time, somewhat proficient. 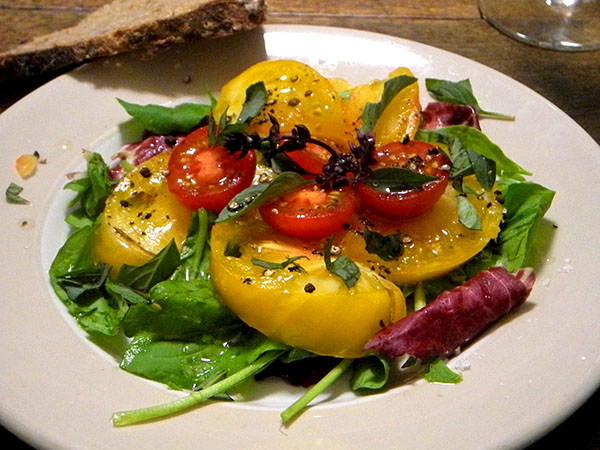