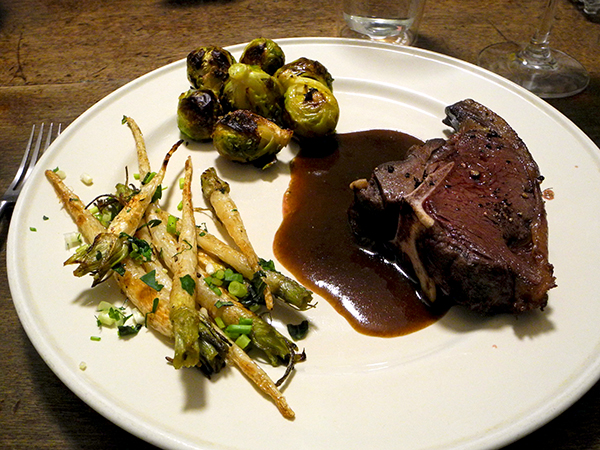 very happy with this meal

Holidays and weekends shouldn’t be the only occasions for special meals, and besides, what’s ‘special’ when you’re trying to do your best all the time?  Still, I have to admit that this was pretty special, and while I served it on an ‘ordinary’ Monday, that wasn’t my original intention.  It was supposed to be Sunday dinner.  The fact is, earlier last week I had gone back and forth in my head about whether to marinate these venison chops 24 hours ahead of time, and in the end decided to play them quite straight (no marinade).  So I missed my cue for removing them from the refrigerator, and did not realize it until almost 10:30 Sunday night.

The new plan for that night was to put together a dish of rich pasta, and make the venison wait 24 hours.

Fortunately nothing suffered from the delay, and certainly not ourselves (the cacio e pepe was delicious).

I had interrupted the sauce preparation just in time, and it might even have profited from the overnight rest.  At least I can avow that it tasted wonderful and even more rich than it looks above.  My interest is normally in minimal, quickly-assembled meals, but I understand the passion for intense spicy sauces (usually thought of a cold weather thing in northern Europe, but a warm time thing around the Mediterranean and in south Asia); last night it was very cold outside, and we were delighted to have the oven working to heat both ourselves and this rich meal.

This venison talk inspires at least one more thought: I understand why a medieval or renaissance-era lord – and lady – would prefer the robust taste of game to so-called, ‘butcher’s meat’, especially after being out riding all day, hunting animals (or men).  Moves tells me I only walked 1.6 miles the day we sat down to this meal, so a single chop for each of us was plenty.

The inspiration for the meal began with an accidental sighting of a sign at the Quattro’s Game Farm stand in the Union Square Greenmarket, ‘Fresh Venison’.  Before this I hadn’t seen them advertising game more robust than pheasant, so I investigated further and, after a conversation with, I think, a member of the family, I ended up purchasing 2 chops from her.  At the time I thought I might have been too stingy bout the amount, but on the day I cooked them I was certain I had gotten it right.

I had very recently purchased David Waltuck’s beautiful big volume, ‘Chanterelle: The Story and Recipes of a Restaurant Classic’, and it was my inspiration for preparing them (the picture on the page facing the recipe is awesome); earlier I had seen a Mike Robinson video (I’d never heard of him until I googled ‘cooking venison shops’) which had already persuaded me to cook them as simply as possible.

I didn’t have any venison bones, so I had to try to reproduce the ‘venison stock’ called for in Waltuck’s recipe;  I think I did pretty well, and even the color looked right. 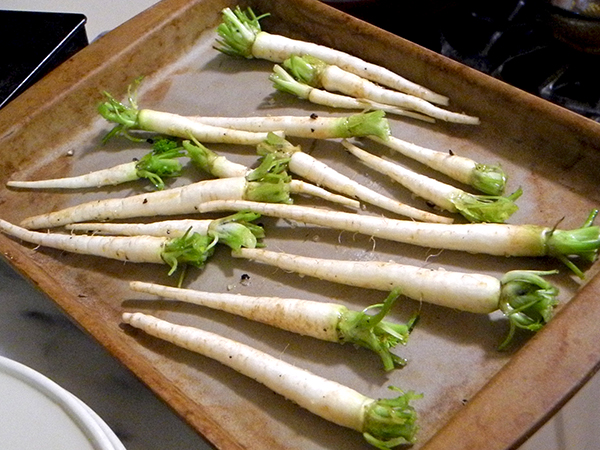