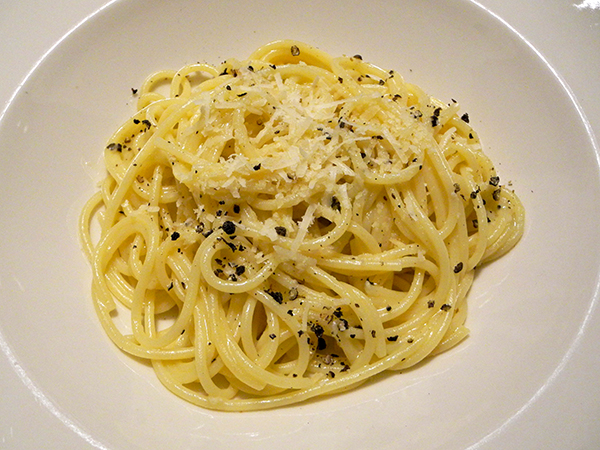 the venison was aborted

It was Sunday, and I was going to prepare a meal which would have included two beautiful fallow deer chops, from the Union Square Greenmarket, and two late-season vegetables.  I had a great time putting together a rich sauce, with a complex faux-venison stock, but 2 or 3 hours in, all wheels stopped when I reached for the venison in the refrigerator and realized I hadn’t taken them out of the freezer.

I dotted the sauce with butter, put it into the refrigerator, returned the vegetables there, and Barry carefully re-corked the luscious Sicilian wine we had anticipated revisiting, and placed it in the icebox as well.  Yes, I also transferred the chops from the freezer and set them near the wine.

It was now late in the evening and I had to come up with an alternative, ideally as satisfying as the meal originally planned, and one which required very little preparation time.

My answer this time was cacio e pepe, to which I was introduced almost exactly 14 years ago, by Amander Hesser, and the former Mr. Latte, and which I have cherished ever since.

It was as sturdy as a venison dinner, and no less delicious.  We had the venison the following day, so I suppose I could also call this a primi.