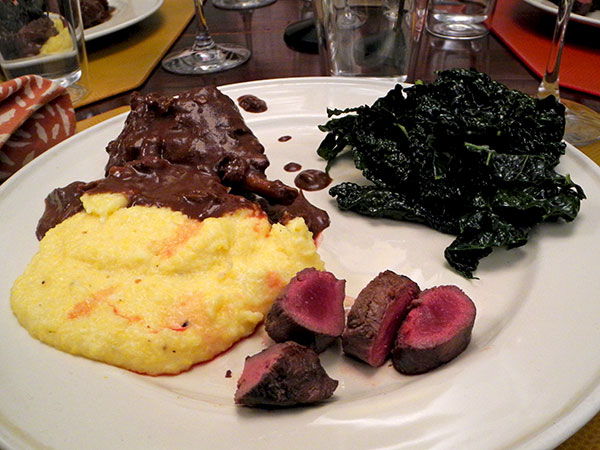 [I forgot to sprinkle the parsley on the sauce before taking the photo.]

This meal was a very big deal for both Barry and I.  Our guests were very dear to us, and the meal we had chosen to share was pretty special.  We’re both very fond of game, and I have often cooked it, often deer or quail, farmed, either here or in New Zealand, and once I prepared a brace of grouse from Scotland (including offal canapés). but I have never cooked hare. Barry and I had thoroughly enjoyed it prepared by others, many years back, once in a restaurant in the Umbrian hill town of Gubbio, and once in a great restaurant which is no longer with us, Chanterelle.

Unless you hunt, or have a generous friend who hunts (I never have hunted, and my hunting Stepfather is no longer with us), if you want to cook it yourself, it’s impossible to obtain wild rabbit (Jackrabbit, or hare), or any other true game meat originating in the U.S.  The FDA doesn’t trust any domestic source for game, but apparently has no anxieties about approving it if it comes from elsewhere, or at least not game birds and hare shot in Scotland.

This winter I finally decided, expense – and carbon footprint – be damned, that I would order a wild hare from Scotland, pay for its airfare, and serve it on one of the feast days of the season.  Because of changes in our own schedule, and the plans of our two guests, we didn’t end up sitting down to my Lepre in Salmi, or Jugged Hare, until January 4.  It wasn’t quite a calendar holiday, but it was great fun, and the company was splendid.  The meal gave me at least one scare before I got it to the table, but I think I’ll call it a success, and the menu I had planned gave us some excellent excuses for sharing some great wines.

The hare course was preceded by a crab salad of Peekytoe Maine crab leg meat, Srirache sauce, lemon, and mayonaise from The Lobster Place, and toasts of Rustica Classica from Eataly.

The plan I used for the hare is one I found in Antonio Carlucci’s book, only slighlty altered, and with an adjustment, for the treatment of the loin, by David Waltuck.  The hare I prepared weighed 3.25 pounds, dressed (or, truly, ‘undressed’).  This is the recipe.  In order of the ingredients shown on that PDF, these are the sources I used:

This was served with the hare and its sauce: