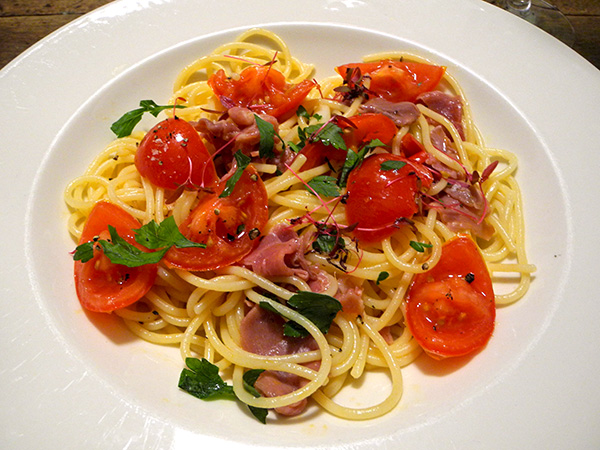 Lately it looks more and more like I’m trying to break ethnic cooking traditions.  At least until recently, I seemed to be entertained enough by (mostly) observing formulas which had been honored by generations immersed in a single tradition. I’m not sure what, if anything my loosening up might portend, but I’m going to be watching any developments.

I have always liked working with restraints in areas in which I have never had formal instruction, partly because I’m a perfectionist. Along those lines, I’ve never designed or built a new house, but I know the huge pleasure which comes from carefully and fully restoring one.

In the kitchen, I’ve very slowly become more confident about some very modest talents, and I’ve always done some improvising, so maybe my cooking is just becoming a little more free-range than it has been until now.

First it was about fooling around with a fine fish fillet and its contorni; then it was about playing with most of a classic German plate; this time it’s about tampering with spaghetti, an particularly iconic element of Italian cooking.

It was to be a simple pasta dish which would be assembled from some ingredients I had lying around the kitchen.  Normally it would be a simple Italian-ish dish, meaning the list of separate ingredients, if not the ‘recipe’, would at least sound Italian, but I ended up slipping out of the tradition, just a bit.

I included the small amount of red amaranth microgreens I still had sitting on the counter, and also a drizzle of an aromatic seasoning blend with the proprietary name, L’eKama, which would be pretty exotic in any Italian kitchen.  The amaranth got in largely because it was there, but also because it would work as another finishing herb, and because it’s so beautiful.  The oil and spice mix was added because the fresh red Italian pepper I included turned out to be so mild it had almost had almost disappeared when I tasted the finished dish; it gave a depth to the taste of the dish way out of proportion to the amount I added.