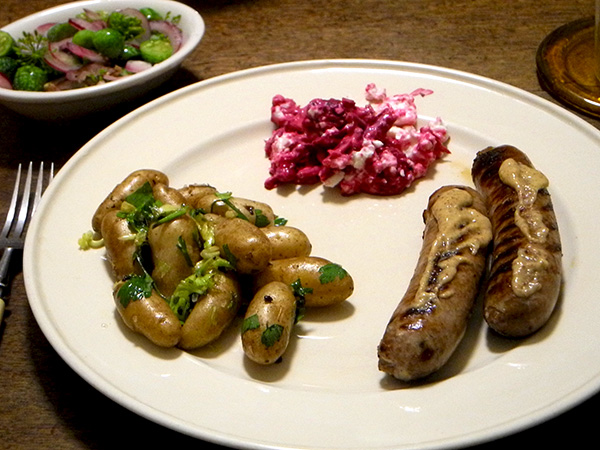 I tweaked my German.

Meaning the cookery.  I bought some frozen Vermont ‘beer brats’ on a whim while I was at the Greenmarket on Wednesday.  My enormous family is from Sheboygan and Calumet Counties in Wisconsin, where ‘brats‘ are an obsession, and the sausages played a huge role in our enormous annual family reunions.  For perspective, note that I have approximately 100 first cousins alone, and at the last reunion of my Mother’s Franconia-rooted family, when we signed in, each branch of the Woelfels was given a name tag with a different color code (I did say my family was German).

I know brats.  And I know Bratwürste.

I like German food, and I take enormous pleasure in it on visits to central Europe, and occasionally at home.  Most of the time the plates don’t stray far from tradition, if at all, but this time I found myself moving beyond it just a little.  The occasion was both necessity (the ingredients on hand and not on hand, the time available, and the summer heat of a kitchen).