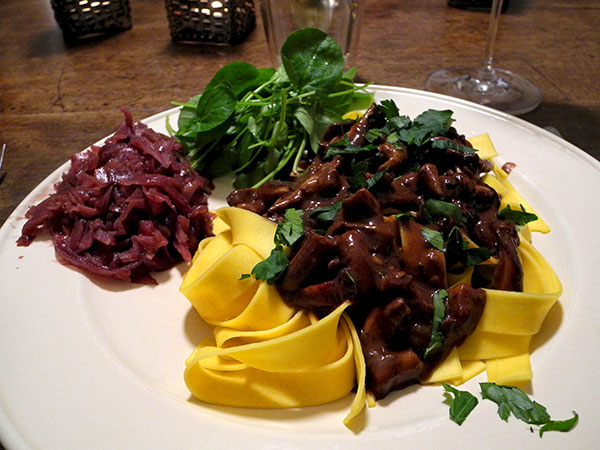 Surprisingly, we actually did have some hare leftover after the feast; I think it was because I hadn’t reduced the proportion of the remaining recipe ingredients to match the smaller weight of the hare I had used.  In truth, what we had left from the earlier dinner was hare ragù, but what a wonderful readymade for new dinner, and I don’t remeber how many times I’d thought of preparing such a rich sauce from scratch, just to be able to serve it on pasta.  I’m always especially on the alert for things I might serve on very good egg noodles, so the rich game sauce resting  in the refrigerator was doubly appreciated.

I also still had a small amount of braised red cabbage I had cooked for an earlier dinner, some of which had already found its way into a second meal, so this would be the dish’s third appearance.

To freshen up the plate, in addition to some chopped parsley on the ragù, I added some fresh, peppery cress.