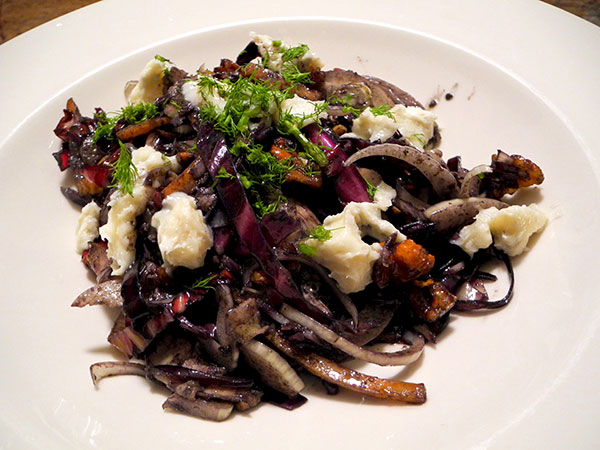 This past Saturday I noticed a smallish glass container on the middle shelf of the refrigerator: The meat leftovers for the meal of Guinea fowl! I wasn’t really worried about the time it had spent on the shelf, especially since it was very well sealed, and it looked very fresh.  I tasted it nevertheless;  it was really delicious.  I couldn’t use it that night, or even the next, because I already had fresh fish at home for the first night, and two fresh lamb chops for the second.

This meant that I had time to do some planning, and the first thing that came to mind for an entrée that would use my surprise package was, almost naturally for me, a salad, certainly using some fresh greenery stuff.  Then I realized that I had bought a large red cabbage on Saturday, expecting it would be good for at least two meals, even if I had not yet imagined them.  I checked on line, hoping for a brilliant idea which would combine cabbage, fowl, and other ingredients I had on hand or could easily gather.  I found one on Epicurious.com, but I’m afraid my idea of working with the freshness of the meat got lost in my enthusiasm for its ingredients.  The ‘salad’ recipe however was terrific.

In the list of ingredients for “Warm Red Cabbage Salad with Roast Chicken and Gorgonzola Cheese” the chicken (or Guinea fowl) could well be substituted with pork or some other meat, or it could remain entirely vegetarian.  In fact it’s so incredibly rich, this ‘salad’ almost cries out for a green salad accompaniment!

The recipe is actually pretty simple, and, once you line up the ingredients, takes very little time.   In order to hurry the process along later in the evening, I had roasted the walnuts before we left for what turned out to be a terrific 8 o’clock Wet Ink Ensemble concert three blocks away, but we were back at home a little after 10, and sat down to dinner a little after 11.