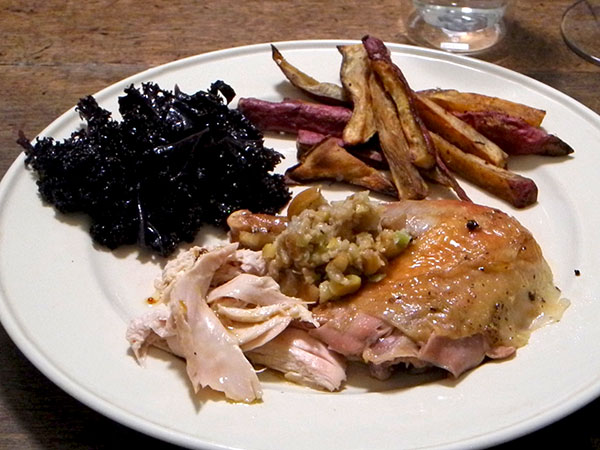 I had seen the little display of vacuum-wrapped Guinea fowl at the stand in the Union Square Greenmarket a number of times before, but it was only a few weeks ago that I finally asked about them.  They were lying on the table inside Lucky Dog Organic‘s stall.  Rich Giles told me that they were grown and packaged by his farmer neighbor, Jennifer Grossman.  Their farms are in the Catskills.  I was intrigued, partly because of the relative novelty of the bird in this part of the world now (I hadn’t enjoyed Guinea fowl myself in years, although I  knew its virtues), and because I knew the meat was at least slightly more gamey than chicken.  I was also attracted to the birds because I generally try to encourage, buy, and enjoy local meat and fish almost as much as I do local vegetables and fruit.

The weight of the birds being sold on Saturday varied a bit, but they were all the same price, an amount I thought reasonable considering the circumstances of their raising; I picked the largest package;  it was just under three pounds.  There were two of us for dinner; we had leftovers.

A personal remembrance:  Many years ago in South Africa, I frequently saw Guinea fowl in the mixed farm and savanna areas of the Transvaal and the Orange Free State.  Those regular sightings, like the perennial red earth of the Transvaal itself, so utterly different from the Midwest and the New England of my experience, as well as the flies the size of a dormouse, and the Long-Tailed Widowbird, I found all entirely exotic.  The Guinea fowl were particularly sweet and beautiful, because of their movement on the ground, and their checked plumage, but I had rarely brought one to my own table, and certainly not for many years.

I probably worried too much about how and for how long I was going to cook the bird this time, although I had a reasonable concern about it being ready at the same time as the sweet potatoes I would also be roasting.  I didn’t worry about the ‘purples’ (‘greens’), since the very sweet kale could be prepared ahead and reheated, or even left at room temperature.   Then, while researching the possibilities the night before our Sunday dinner, I remembered that I had some cooked chestnuts in the freezer, from, well, I don’t know how far back.  I decided it was time, also an appropriate time, to use them, so I defrosted them.  The next day, both the manner and order of the rest of the meal’s cooking eventually fell into place, and the chestnuts became an integral part of it.

In the end I just prepared a simple chestnut stuffing and roasted the bird, on a rack above the potatoes, until its internal temperature was 160º.  The result was a perfectly-cooked Guinea hen, easily carved, more flavorful and juicy than chicken, and only very slightly more robust (gamey) in flavor; the fact that I didn’t miss the absence of a relish or chutney of any kind should be the giveaway for that.  There were also some pan drippings, just enough even without deglazing the small amount of collected liquid.

I will admit that the sweet potato oven fries saw the light of the kitchen twice after they were first put into the ancient Magic Chef, while I juggled developments in the separate cooking times of bird and tubers.

One more small satisfaction last evening:  Barry and I listened to Marek Janowsky‘s recording of ‘Die Walküre’, beginning at the moment I actually started cooking.  The ‘Ride’ began just as I brought plates to the table (whoa, drama!), and we didn’t rise from the table until the last note.