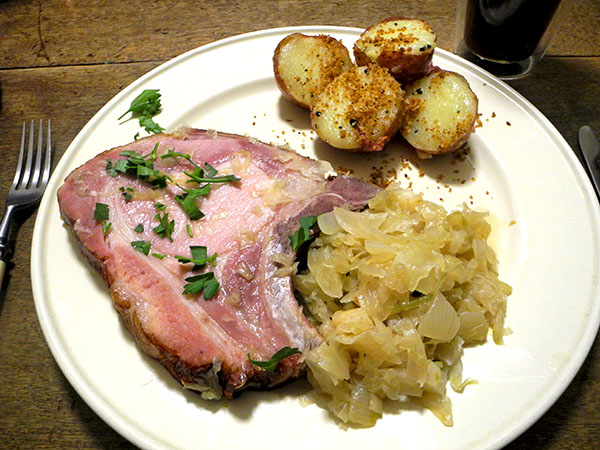 It was a snow day. It felt like a holiday. It was also pretty cold outside (and we still haven’t turned on the heat inside), so a warm kitchen felt right. I had all the makings for a traditional German entrée inside the apartment, and we also had some terrific beer.

We had a terrific, traditional German dinner. Also, nearly everything in it came from farms in the area (our area, not Germany, which somehow makes it even more special).

We usually drink wine with our meals at home, partly because we both much prefer draught beer to bottled, but two of the beers we spotted at Schaller & Weber last week were very special to us: These Rauchbiere are from the area of Northern Bavaria from which my mother’s family emigrated to Wisconsin almost 175 years ago. In addition, both unusual and quite rare, we had thoroughly enjoyed them at Schankerla, the beautiful Brauereiausschank of the brewery itself, 5 years ago, with Barry’s mother, and we had never forgotten those pleasures. With some of the entrées however, we also had enjoyed good Franken wine, in a Bocksbeutel.

Smoked bier is not a gimmick, but an ancient tradition which continues today, and from our own experience alone, with good reason. Five years ago Barry described his first taste, “Nice and smoky like bacon in a glass.”

My maternal great-great-grandparents, who were from Franconia, but not Bamberg itself, may never have had Rauchbier. If they had, they might never have left.