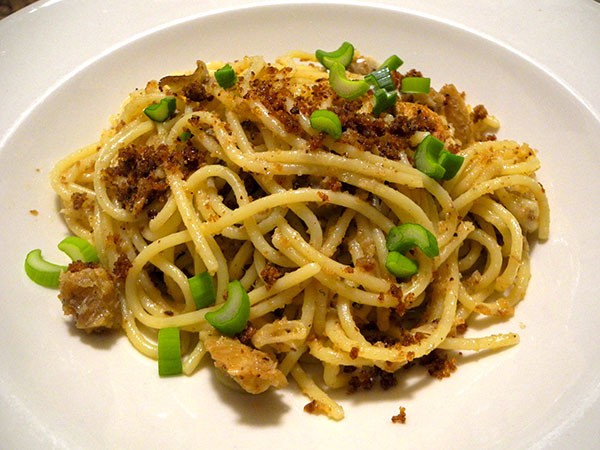 Like all non-farmed fish, it’s essentially ‘game’, but unlike almost any other fish, it’s actually not ‘fishy’ at all.

We love eel, fresh or smoked. We are therefore always very grateful to the folks who are willing to go through the, literally, heroics of cleaning these magnificent creatures. With smoked eel however, the worst of the process, removing the very slippery skin, can be skipped, the consumers themselves inheriting the responsibility, made much easier after its surfaces have been tamed in the smoke oven.

The image below is of a single one-pound smoked eastern Long Island eel, displaying a beautiful green/gold sheen on our kitchen counter, after it had been removed from the vacuum packaging where it had lain, cut crosswise for convenience. 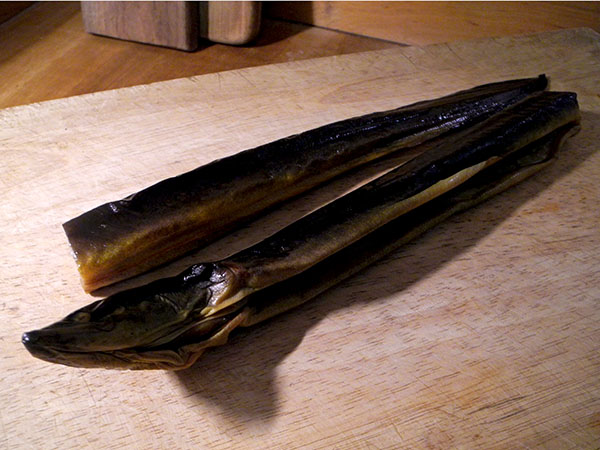 *The pangrattato was prepared by adding about a third of a cup of homemade breadcrumbs   to about a fourth of a cup of olive oil in which more thinly-sliced Tamarack Hollow garlic cloves and 3 anchovies from Buon Italia had been heated for a short while, and, after being stirred for 4 or 5 minutes, the mixture was then drained on paper toweling and brought to room temperature