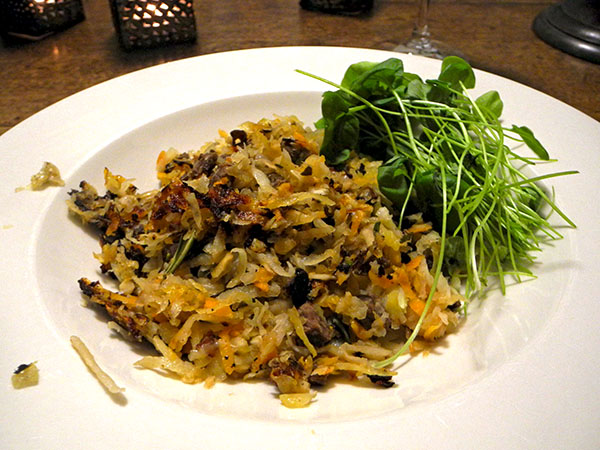 The idea was to find something in which I could incorporate some leftover elk. I quickly came across an old newspaper clipping in a file I’ve marked, ‘using leftover meat’. It seemed it would be a good bet.

The recipe which became my jumping off point had was within a 2012 New York Times Food section clipping. It seemed to have a lot going for it, and it would be a small investment in time and the number of ingredients. While described as a way to rejuvenate overcooked meat, that definitely wasn’t my problem; I merely wanted to stretch a cup of leftover elk and to overcome some of the chewiness which had accompanied its first appearance 4 nights before.

To start with I reduced the strips of elk to very small pieces, (making sure to cut across the grain this time). The instructions called for twice as much meat as I had, but I wasn’t concerned about that. Instead, having almost immediately realized I had far too few potatoes to make a meal for 2, I was stumped for a moment before deciding to throw in a few different roots (one turnip, one parsnip, one carrot, and part of a large horseradish), grating each of them in turn, as I did the Russet potatoes and the yellow onion that were parts of the printed recipe.

Oh, and I didn’t have thyme it mentioned, so I used rosemary and sage.

Otherwise I proceeded exactly as it was written, but while I was supposed to find the underside of my sorta-potato pancake turning a “deep golden brown”, the constituents never bound together enough to be slipped onto a plate and reversed into the pan, as the recipe instructed. I don’t know what went wrong, unless it was the fact that almost half of my ingredients were without the kind of gluten required for the chemistry to make its magic.

I left the vegetables flattened in the pan as they had originally been arranged, and only moved it, in dollops like a rice or porridge, once I thought my ‘Rösti’ was fully cooked, into 2 shallow bowls.  I had made the move just in time, because it I discovered I had very narrowly avoided burning the bottom. There was a lagniappe however: I had somehow managed to produce a certain amount of socarrat, something I had heard of, but never experienced, because I’ve never had a proper paella.

We were both amazed at how delicious it turned out in the end. Amazed.

Melissa Clark’s recipe, much of which I seem to have dodged, is here.