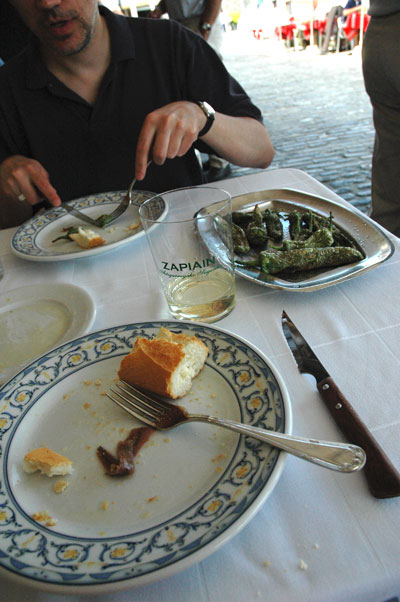 It’s near the depth of winter as I write this, there are no Pimientos de Padrón to be found in the Union Square Greenmarket, and, in the event, we’re also on the other side of a great ocean from the Iberian peninsula, but during a conversation with friends last night I was reminded of a wonderful meal we enjoyed almost 10 years back in the Basque town of Getaria.

The peppers in the photograph had been brought to the table after we had finished some freshly-oiled anchoas, local anchovies, and, as I recall, before 2 servings of wood-grilled monkfish had arrived. The picture was taken at about the moment we had watched our large cola de rape being carried by the gills just past us on the stones seen in the background, on their way to the massive open-fire grill behind Barry.

The warmth and simplicity of the environment, sitting outside, sheltered from the warm sun above the harbor in an ancient Cantabrian town, and the delicious food and wine*, plus the perfect companion in Barry, and the más amable de los posaderos, made this unforgettable meal. It’s one of the few I have ever been tempted to include on this site, normally limited to those I prepare myself.

I can’t say that simplicity is the only thing that attracts me on the rare occasions we eat out, but when it’s as inspired as this meal was, I would never ask for anything more.

The pleasures of this moment can be shared years later because it was recorded in the image included here, first published in May of 2007 to accompany a post on my general blog, written before I had begun writing about the food we enjoyed.