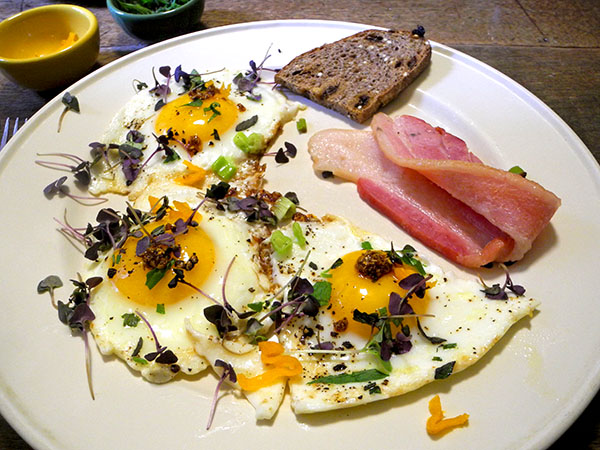 After the luxury and pleasure of another Sunday breakfast like this one, I could almost be tempted to forgo making any meal that does not involve eggs in one form or another. I won’t, if only because I wouldn’t want dishes like this to ever become routine.

But these ‘breakfast’ forms are pretty easy to assemble, and they open themselves up to infinite variations; I’ve hardly even begun to go there.

This one was made non-routine, in an unanticipated way, when I picked up a neat-looking loaf of bread at Whole Foods a few days ago (I didn’t have the time to hunt further, as I normally would).  There was noting in its appearance behind the small cellophane window, or in the name on the label itself, that would have indicated it was a raisin bread.

It did this time. It was actually a very interesting addition to what was already a pretty diverse company of flavors in this breakfast.