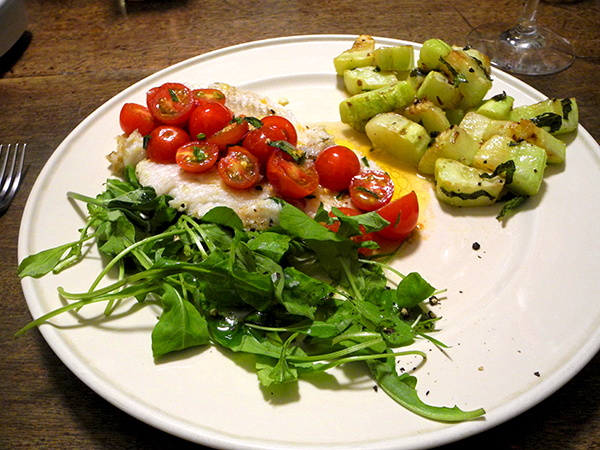 The Fluke (sometimes called ‘summer flounder’), so abundant in northeastern fish markets at this time of the year, may not have the smoothest name, but its taste may be the most interesting of all the flatfish available locally.

It ranks above even the more mild (‘delicate’) flounders, in my opinion, although I can’t claim extensive experience with most of the huge family of Pleuronectiformes: The popular nomenclature of most fish, and especially those we eat, is confusing, and varies geographically (labels may be misleading and out-and-out erroneous), but that family includes many other fine food fish, like the other flounders, as well as the soles, turbot, brill, plaice, and halibut, a few of the some 500 species.

I’ve enjoyed many flatfish, harvested from several large seas (I’ve even caught fluke myself), but here on the northeastern Atlantic coast, I’ve always been very happy with both the taste and the relative firmness of the local fluke fillets.

But maybe the real star last night, and certainly the surprise of the meal, was the totally wonderful cucumber which Franca had slipped into my hand last week.  She called it a ‘bitter melon’ cucumber, but I had a hard time locating anything that looked like it on line using that name.  There are a ton of different kinds of cucumbers out there, and probably as many melons (the significance of my mentioning the latter will become apparent in the next sentences). Eventually, I added the adjective, ‘fuzzy’ to the phrase, and this variety finally showed up. It seems to be called ‘Carosello Mezzo Lungo di Polignano‘, and it apparently comes from Puglia, and it’s usually associated with Bari, on the coastal north. Elsewhere it shows up as “My Furry Cucumber!” I’m still not certain that’s what we enjoyed so much last night, because elsewhere on line there are other fruits that answer the description of our cucumber, varieties from the New World (cucumbers originated in Asia), described as botanically melon, but used as cucumbers.

There was fruit for a dessert.