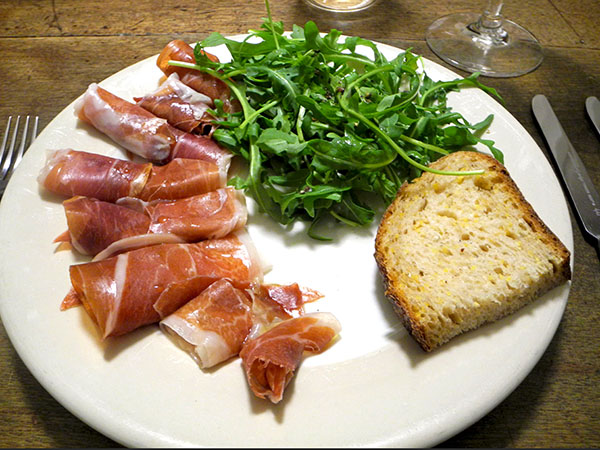 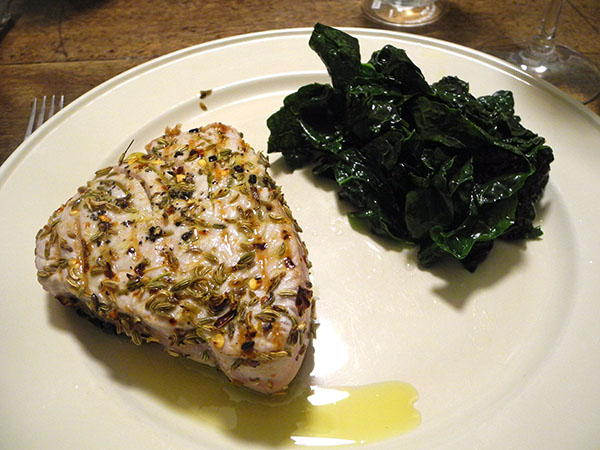 A dear friend I’d known for almost 60 years was visiting New York from Miami Beach this week. We had originally planned to go out to dinner, but then I thought, while he had strayed south a number of years ago, he knows this city very well, having moved here directly after college; he might actually prefer a meal at our apartment, if only for an expanded opportunity for the extended conversation we were all looking forward to.

The only other consideration was whether I could put together something which would not divert me from that conversation, and yet would still be delicious (and at least a little special). The meal we would share with an old friend had to be something of an old friend itself.

The plan moved toward execution when I was able to locate three beautiful tuna steaks on my visit to the Union Square Greenmarket that morning. Each of the 4 courses I decided to serve (in the end there were only 3) was familiar to Barry and myself, and last night they almost assembled themselves (the symposium itself is all I can remember today).

I can recommend the basic outlines of this meal to anyone with similar entertainment considerations. Unfortunately I had to go with 8-ounce pieces of tuna, because that is what was available yesterday, but steaks of 5 or 6 ounces each would be a very reasonable, abstemious option.

Many of the elements in each of the three courses was of local origin, although in the case of the Speck, ‘local’ meant only that it was produced in this country, not northern Italy.

I was prepared to serve a cheese course of five local (Consider Bardwell) cheeses and thin polenta sourdough toasts, but we moved straight into sharing a basket of sweet cherries from Kernan Farms.