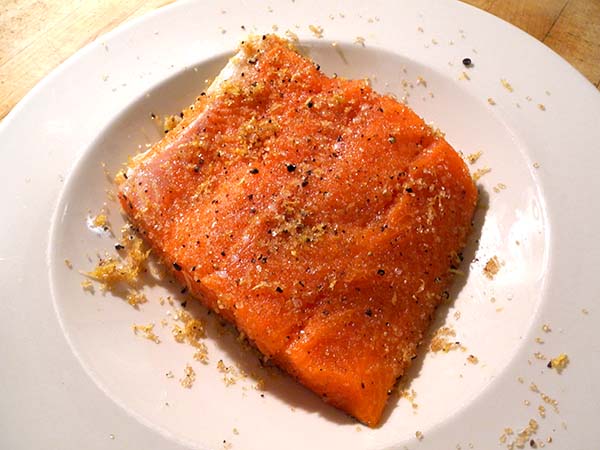 filet after being rubbed with the sugar and spices, before it was refrigerated

Thinking of the arguable thesis that an artist’s best work may often arise from working with constraints, I will make the modest proposal that the same thing can work for the creative output of an ordinary cook.

I was unable to get to the Greenmarket on Monday to pick up some fish, so we enjoyed a pasta that night. The next day, not wanting to cook meat or another pasta, I decided to check out the wild salmon selection at Whole Foods. I would have to cook it on the top of the stove, since our oven is ailing, but I knew that was unlikely to present much of a problem, especially since I had just come across a very interesting Melissa Clark recipe which described pan-grilling the fish after it had rested in a spicy brown-sugar marinade. The salmon was not on sale, as it often is, but the wild Coho filets were being offered at what I would call a pretty reasonable price.

I still had a small amount of the red cabbage we had been enjoying for a week or so, and there was a generous amount of upland cress in the crisper waiting to be summoned to embellish a worthy plate.

Finally, still worried that what I had in mind wouldn’t quite add up to a complete meal, I decided to boil a very few potatoes as a foil for the other flavors I had gathered. Because of my introducing the potatoes, the excellent small Balthazar rye boule, which I had bought that day to fill out what I had earlier anticipated would be a pretty sparse course, stayed in the breadbox instead.

The meal turned out to be far more satisfying than I had hoped it might be.

If it had a geographic character, I would say that it lay somewhere between the German-speaking lands of Central Europe and the Pacific Northwest of the North American continent. Maybe New York City. 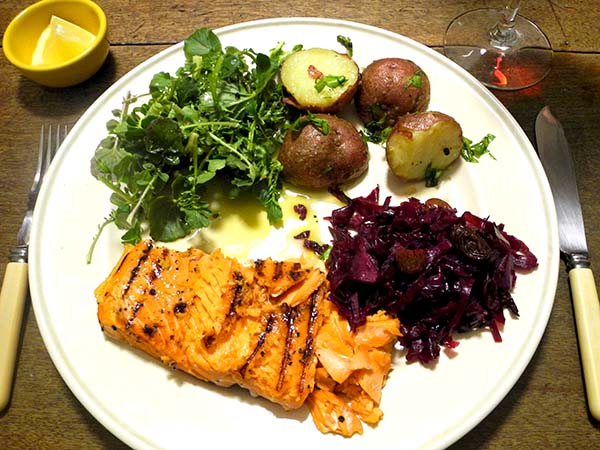