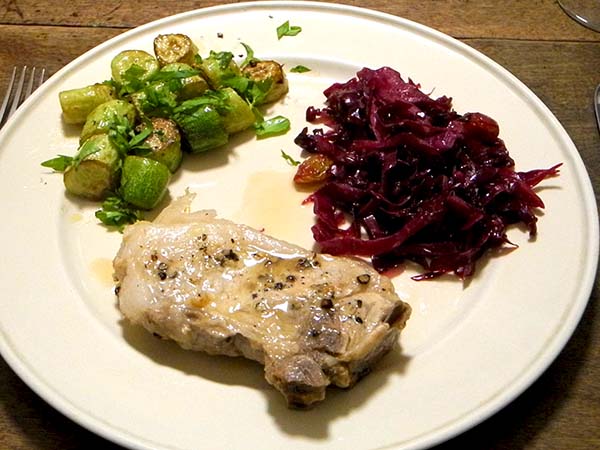 I love cucumbers. And thanks to Martha Stewart I’ve now discovered the sautéed cucumber. I took some liberties with her recipe however, in consideration of the vegetable materials I had on hand, and my own taste: I had 3 small Korean cucumbers, I cooked the chunks until they had begun to brown, and I finished them with lovage.

The cabbage was left over from an earlier meal, and tasted even better than it had the first time.

The pork was from a new Greenmarket source, one which happened to have the smaller-size chops I’ve had difficulty finding lately. I used the same recipe I’ve used for years, but since my oven is currently unavailable, I cooked them on top of the stove in a heavy enameled cast iron pot. I think I should have seared them a little longer before squeezing the half lemon over them and covering it: They turned out less than brown, but the flavor was terrific.

Since I’ve just pointed to the recipes or procedures, now I only have to list the ingredients: