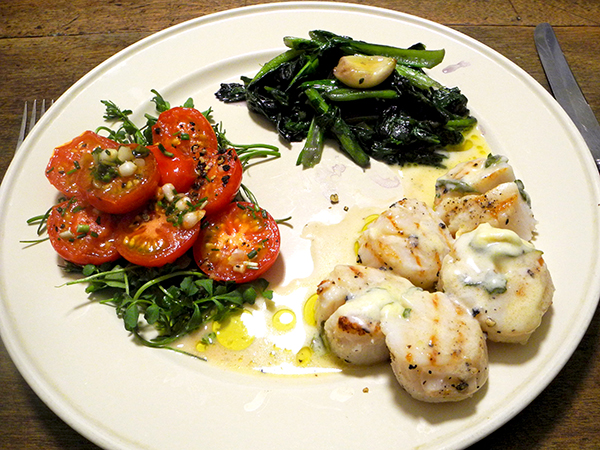 almost over the top, at least by my measure

I rarely include a cream sauce in any of my cooking, and in fact the finishing touch on these scallops was not actually a cream sauce, but a ‘composed butter’ which included fish juices, herbs and wild garlic, a small remainder from this earlier meal, kept frozen in a ramekin until now.

The picture above is very unlike the usual images of pan-grilled scallops found on this blog (this one is my favorite), which are frankly more to my taste, but I couldn’t resist pursuing the experiment this time.

I’ve had the small ramekin on my mind for two weeks, hoping to arrange a perfect [second] marriage for it.  I’m more familiar with composed butters as a final touch for grilled steaks, a device I’ve only encountered in Julia Childs books; I was afraid that matching this one up with shellfish might be too much of a stretch, but the result was delicious.

The plans for virtually every element of this meal came together only at the last moment – in fact only while I was actually already cooking – and that included the treatment of the scallops.

Mildly-aromatic ‘wild garlic’ came into play twice during the preparation of this dinner, as a finish for the tomatoes, and as an important element in the herb butter spread on top of the scallops. I’ll think of this tiny (actually, at least partially domesticated) plant as my first 2016 ‘find’ in the Greenmarket.  It’s tasty, attractive, pretty versatile, and keeps pretty well. It’s also the harbinger of a growing season which is actually heralded by the first appearance of ramps, which, while definitely wild, have become a fixture, a tradition, for both the farmers and their happy city customers. 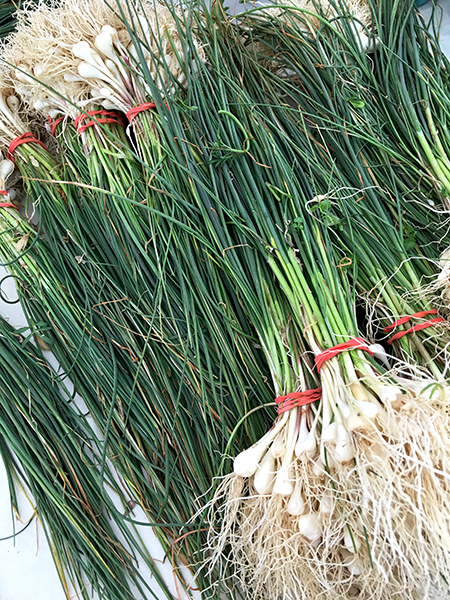