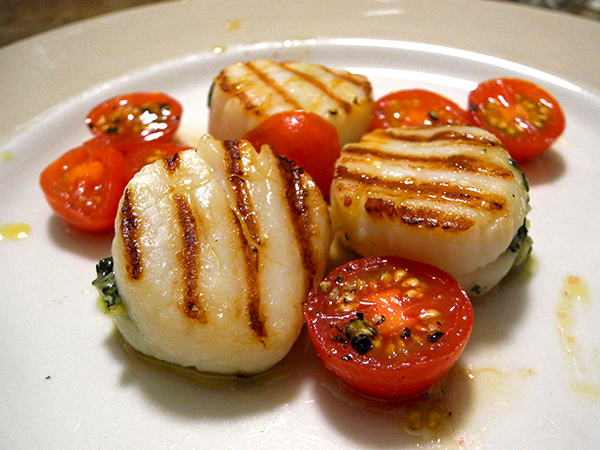 This was also just about a perfect meal, for the cook and the diner, but to be totally honest, I have to quickly add that it gets that salute only by the standards and means of a modest kitchen and a quite-ordinary competence.

Also, it was the child of necessity, or more exactly, the happy outcome of a glitch in plans which is not unusual. On my trip to the Greenmarket on Friday I was disappointed once again in not finding John Dory fillets (they had sold out much earlier).  I’ve become accustomed to the need for adjusting to whatever might be available in the fish stalls (or those of any other venders) at the time I arrive, which is often well past the hour when the most [exciting?] fish may have been scooped up by its fans.

When I stopped by Pura Vida Fisheries this Friday at about 1:30 in the afternoon, Paul suggested triggerfish fillet.  I don’t think I had ever eaten it before, and I’m certain I hadn’t cooked it.  Apparently even the Grey triggerfish is somewhat rare this far north.  Perhaps because its habitat is along rocks along the shore, where it dines on shellfish (yum!), it’s not really fished commercially, but this is the time of year it’s most likely to be found, usually by anglers.

But then we both noticed that there were only two left inside the pan resting on the the ice, and they turned out to weigh only about 8 ounces altogether.  I decided that wasn’t quite enough for the two of us at dinner, so I added 6 large sea scallops to my ‘catch’, and added it to the fillets already on ice inside my insulated bag. I would sort out the menu later.

The meal I assembled, of two courses, each featuring some great seafood, was otherwise very minimal in both outline and execution, allowing the quality of some very fresh ingredients to star without any distractions.

There was another first last night:  I used my new [previously-owned] tin-lined copper au gratin pan for the very first time, employing it here to sauté the Triggerfish fillets.  I have never cooked with copper pans, and I didn’t buy it for display (I leave that to the seasoned-polished cast iron).  I loved the copper thing, finding it, at least in this outing, most remarkable for the speed with which it heated. 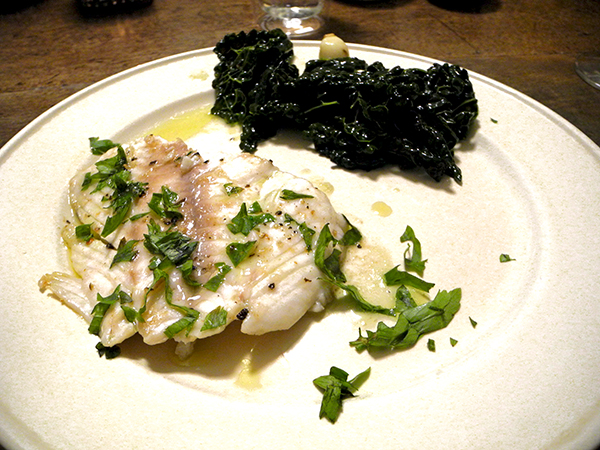 While Scallops are a familiar presence on our table, the Grey Triggerfish doesn’t even make it to our fisher-owned market stands very often, but now I know that it’s a great treat when it does.  I wrote above that this fish hangs out around rocks, and so, in addition to a great texture unlike anything else I can think of, it has an attractive, quite subtle, rather sweet taste, with a finish suggesting crustaceans.  It does indeed. Lovely.

Because it involved no elaborate preparation, the second seafood course followed the first with a minimum of delay. Nice.

I ended up inventing a recipe for the Triggerfish myself, because I had found nothing useful in any of my cookbooks, in my files, or anywhere on line.