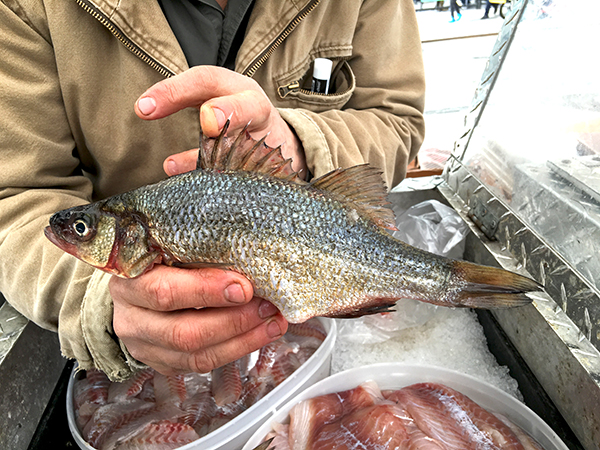 before (Paul displaying his own purchase).. 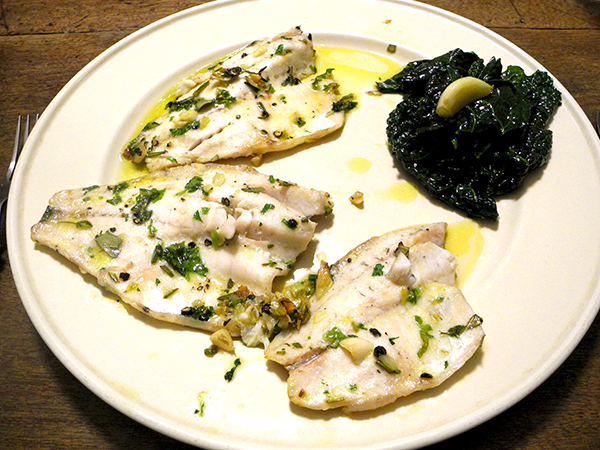 ..and after (my display of our dinner)

I was introduced to this terrific fish today on one of my regular visits to one of the fish stalls in the Union Square Greenmarket, Pura Vida Seafood.  I’ve learned to pay attention to what Paul tells me, and this is another of the proofs.  I had never cooked white sea perch before, but the taste is superb, and the texture is more firm than that of other perch or similar fish.  The price is modest by today’s standards, and, for those who dwell on such things, the fillets have very few bones.

The recipe I used had the advantage of simplicity and it could be divided into two periods of a cook’s attention, both virtues especially appreciated on a night when I would not be returning to the apartment from a concert until almost 10 o’clock.

I was able to prepare a marinade and arrange six small fillets in it before I left for Avery Fisher Hall and Esa_Pekka Salonen’s performance of Messiaen’s ‘Turangalîla Symphony’.  Soon after arriving home at 10 o’clock I lit the oven and, once it had heated to 500º, place the fish in it, still in the pan with the marinade.  Less than 10 minutes later I was arranging it on the plates.

The recipe is found in Mark Bittman’s “Fish: The Complete Guide to Buying and Cooking“.