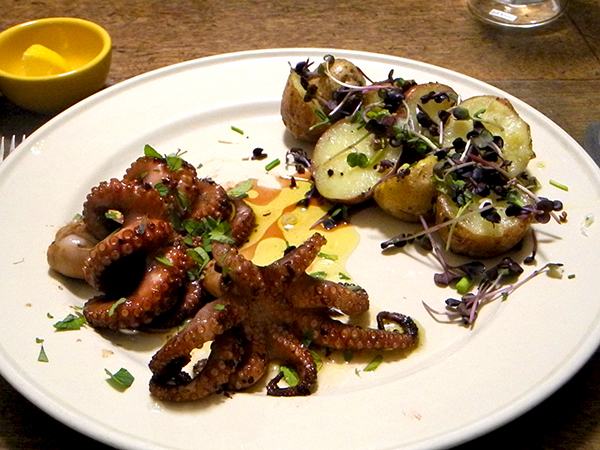 It had been almost 5 years since I had cooked octopus. It had been an occasional treat for a number of years before that; it was probably my enthusiasm for local ingredients that has caused me to neglect it since.

Yesterday my enthusiasm for octopus overcame the locavore in me.

I had been unable to purchase or enjoy any seafood yesterday because of our schedule; today (Tuesday), because there is no greenmarket offering fish anywhere in Manhattan at least, I headed for The Lobster Place in Chelsea Market, hoping to find something which not available from the fishers who sell their catch in Union Square.

I bought 4 small Spanish octopuses (yes, they had been previously frozen, but so is all the wild salmon available to us on the east coast, and that doesn’t stop me). Unfortunately the rich ocean life of the northwestern Atlantic does not include octopus, and I’m very fond of octopus.

I prepared them much as I always had in the past.  They were delicious, as always.