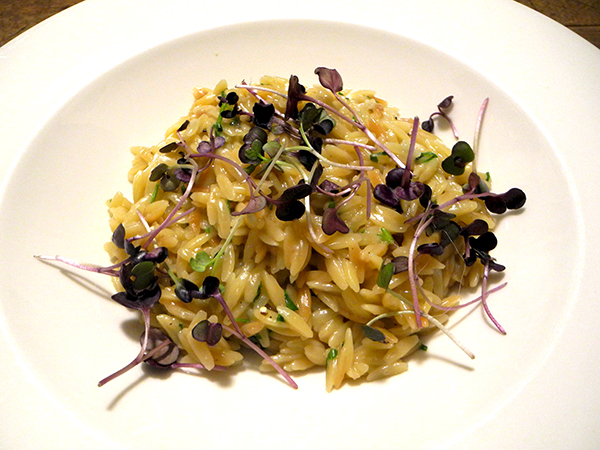 Note to self: This was a wonderful, wonderful dish, and I would not hesitate to serve it, or some version of it, to any guest, even as a main course; also, it was a beautiful convergence of necessity and availability.

This is when cooking gets pretty exciting. I wanted to find something which would demonstrate the tastiness of a pretty special ‘leftover’, and make it a full meal, and I knew I would not have much time to prepare a late supper after returning from a concert in Brooklyn.

The ingredient I had on hand amounted to 2 cups of a very savory broth which remained from the preparation of veal tongue in a dinner enjoyed last week.  My idea was to turn it into a hearty soup, with the addition of one of the tiny pasta shapes I’ve often seen, but have never used, like ditalini, tubetti, or acini di pepe.  I wanted the pasta to have been made in Italy, and artisanal, but I was at Whole Foods, and didn’t have time to go to either of the shops where I usually find the imported dry pasta I use. I was about to give up when I saw a neat little box with a cellophane window displaying beautiful rice-like shapes. It was orzo. I was charmed, and I was certain I could work with it.

I had no idea it would be so easy, and fun, requiring even less attention than its more common rival, risotto made with rice.

Both before and after cooking it looks very much like rice (specifically, long-grain rice, which isn’t really suitable for risotto), and it’s cooked very much the same as risotto, yet with virtually no stirring.  But it tastes like good pasta.

I love pasta, and rice, and now I love orzo, and I’m looking forward to the next time I have some good homemade stock on hand (I only used half of the box last night).