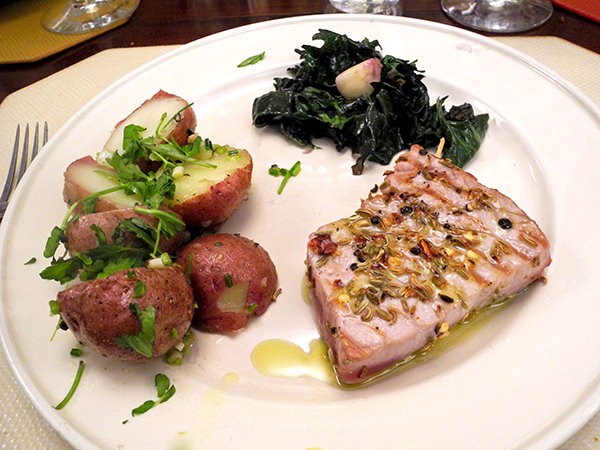 We hadn’t seen our friends in years; they were visiting from London and Norfolk, and they were coming to dinner. I wanted to serve something fine, but I didn’t want to spend all of my time in the kitchen once they arrived.

The solution seemed obvious: To start there’d be a good salumi on plates with some excellent greens, and we would end with some very good cheeses. The main course would almost certainly have to be fish (to show off our local bounty and its quality, and because I wanted it to require little heat, because the weather was so very mild), and it would also have to be very simple and quickly assembled.

My plans were confounded early in the day by the fact that I arrived too late at the Greenmarket: the tuna was already gone.  Seeing nothing that would be a good substitute, I headed south, because of the logistics, to Citarella rather than The Lobster Place, while knowing that if need be, I would have the latter as a fallback.

All of which is to say is that, while the tuna was delicious, and from the northwest Atlantic waters, it was not purchased at the Greenmarket, directly from the fisherman or his colleague. I had to tell that to our friends, while extolling the otherwise locavore character (except for the Speck) of the the meal we were sharing.

The meal began, after a taste of whole wheat Mario Fongo grissini stirati and mixed black olives from Buon Italia, with a light course of salumi.

The main course was assembled pretty quickly after we had finished the salumi and cress, because I had started boiling the potatoes the moment before we sat down to the first.

The cheese course followed after we had lingered a bit following the main.