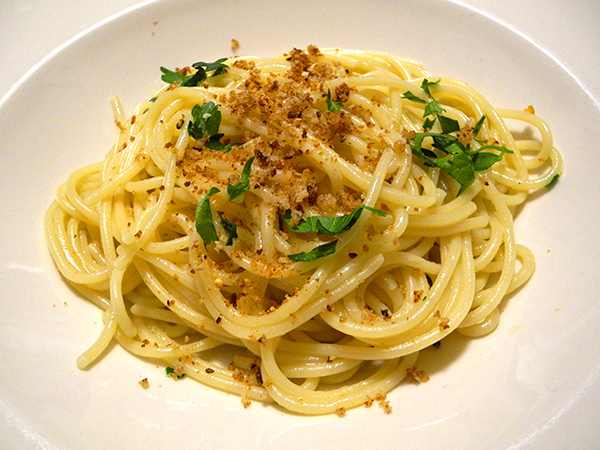 It wasn’t yet midnight when we sat down to this pasta dish yesterday after returning from a performance of Robert Ashley’s opera-novel, ‘Quicksand’, at another ‘kitchen’, The Kitchen. The designation ‘Midnight Pasta’ is not my doing, but is rather inspired by its simplicity, the fact that all of its ingredients are staples nelle cucine italiane, and the speed with which it can be prepared (20 minutes or so).  The affectionate name, in Italian, ‘spaghettata di mezzanotte‘, hints at its popularity.

I cut a printed version of the recipe, by David Tanis, out of the ‘Dining’ section of the New York Times back in 2011.  The article’s titillating headline read, “At the End of the Night, Satisfaction“.  In fact, there may be an almost infinite number of variations to this meal, and I imagine almost all of them are equally seductive.

We had seconds, and skipped a cheese course.

I followed the Tanis recipe more or less as printed, although I reduced the amount of pasta, and that of the remaining ingredients in the same proportion.  I also added some reserved pasta water and emulsified it in in pan where the cooked and drained pasta had been returned.  Also, while I did not use Parmesan cheese he mentioned as an option, I further tweaked his formula by adding some toasted homemade breadcrumbs to the top of the sauced spaghetti once it had been placed in the two bowls.