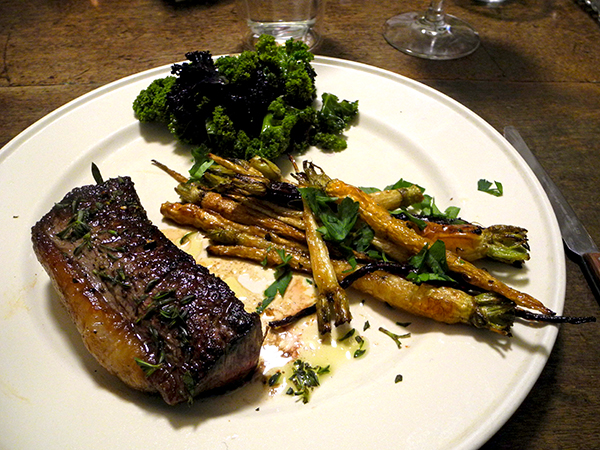 I came across this cut of beef late in 2009, when we were checking out The Meat Hook, in Brooklyn, not long after it had first opened.  The meat was beautiful, the deep red of the lean flesh contrasting with the almost pure white of the thick layer of fat, each piece curved into a loop and impaled on a wooded skewer.  The butcher explained its origin and its properties.  I was intrigued, at least as much by the aesthetic and perhaps by the relatively exotic story of its origins (Argentina, we were told), as by the promise of excellent flavor, but it was only months later that I actually got around to cooking a culotte steak.  I had purchased it then from Dickson Farm Stand Meats, our even more local butcher.

It’s been a favorite for both of us ever since.  Although I hadn’t brought one of these lean, very flavorful steaks home for a while, partly because we don’t really eat beef very often, yesterday we may have enjoyed the best one yet.

For the best experience with this cut it’s essential to know what kind of steak you’ve brought home before throwing it on the fire.  The culotte is very lean, and could turn out more chewy than expected – or desired – unless certain procedures are followed.  Because it is so lean, it should not be cooked medium-rare, which would normally be our preference with beef, but rather closer to a medium doneness.

In the past I would always sear it on one side for 2 minutes, turn it over and sear the second side for 45 seconds, then place it inside a moderately-hot oven (375º) for 7 or 8 minutes.  Last night I approached the process very differently.

Earlier in the day, when I was inside the Dickson Farm shop in Chelsea Market, I discussed the virtues of the cut with a young butcher named Philip.  Clearly as well-grounded in the mysteries of the Kitchen as he was in the details of meat cuts, he suggested briefly searing the side of the steak with the heavy layer of fat in a heavy pan (I used a well-seasoned cast iron skillet) just enough to release some of the fat onto the surface of the metal, then cooking each of the sides for about 4 minutes over medium heat, and finally briefly searing the fourth, or top side (the one opposite the side with the fat).

The result was perfect.  The flavor was superb, and because we were able to slice the still-square-section steaks very thinly, and also almost certainly because of the quality of the steak, the meat was quite tender.

* Note: I’m still unresolved on the subject of the moment when a steak should be seasoned with salt, or pepper; this time I actually forgot about seasoning until after I had already started to cook the second side, and then I sprinkled that side, and, when it was done, the first side; I’m going to have to do more research on the subject