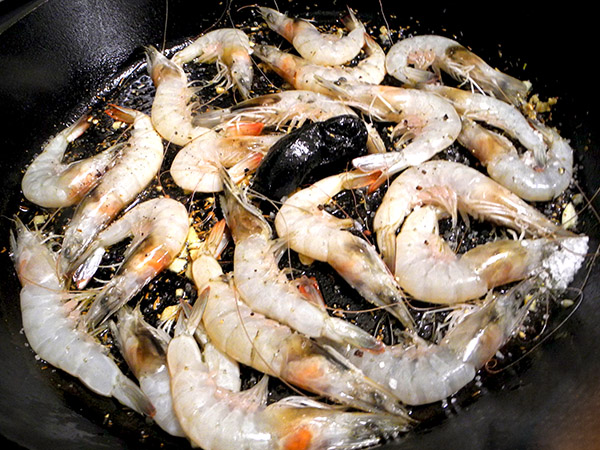 With the arrival of Eco Shrimp Garden to the Friday Union Square Greenmarket, I now can buy fish on a single day which can serve as meals for two consecutive days. The very fresh decapoda, pulled out of water the same day they are sold, can keep for the next (actually, and even beyond, I understand) without any taste sacrifice.  This means that we are able to enjoy that night whatever I select from the Pura Vida stand, and still enjoy a seafood meal the next, even if I can’t make it to Union Square Saturday.

I wish I could claim it as my own, but the excellent recipe I used came from Mark Bittman; it was in a feature article inside the FOOD section of the New York Times, ‘The Pantry Made Me Do It: Shrimp, Simply Spanish‘.  The print version included the simple recipe text; unfortunately the link above only includes a four-minute-plus video, and in it Bittman ends up adding tomato, which I did not do.

This  was more than a recipe however. In his piece Bittman’s describes his attitude toward stocking his kitchen, and making do – or, in his case, much more than just making do – with what is on hand.  It’s an attitude to which I have aspired for a long time, and which I seem to be gradually obtaining. Next there was my happy discovery that I actually had on hand last night every ingredient he used in the recipe with which he illustrated his point. I was thinking, ‘who has a dried chipotle pepper, saffron, and good cumin seed together in the kitchen at the same time?’  Maybe I really am on my way to chef-hood. 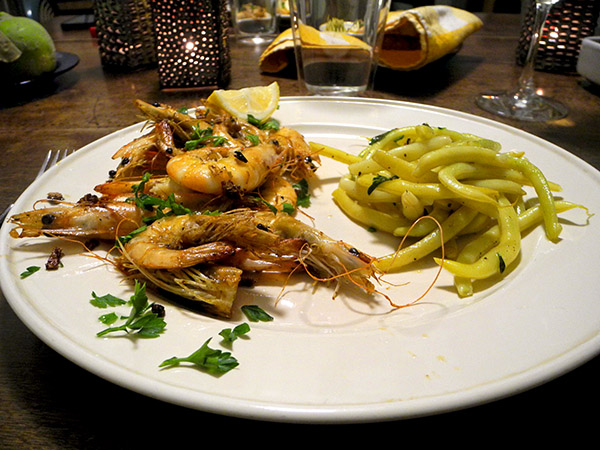