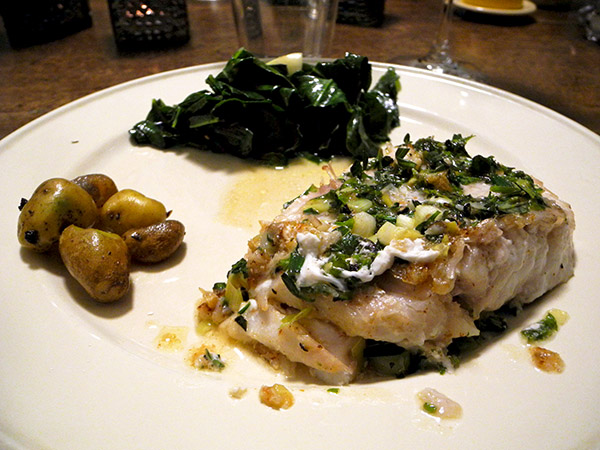 No, not all white fish tastes the same.  Like us, the Tilefish loves crab and lobster, which may help to explain why we love Tilefish.  But, contrary to what some people say or write about it, while the flesh is lean, tender and particularly sweet, no one will mistake it for crab or lobster;  more like cod that’s gone to heaven.

The vegetables accompanying the fish included a beautiful, very tender bouquet of collards I had bought a few days before, plus one ‘fluke’: ten baby ‘Papa Chaucha’, pressed into my hand that afternoon by one of my favorite farmers; both were Greenmarket finds of course. They were delicious; earthy and creamy, I’m definitely going back for more next week.

NOTE: ‘Papa Chaucha’ [‘ancient potato’] is a name which I believe covers all of the ancient breeds of potato, originally found all over Central and South America, although the Andes may be a more specific geography for these particular [cultivars?].  Franca’s Berried Treasures stall sign described her ‘Papa Chaucha’ (she had both these very small examples, and some larger) as Ecuadorean, added that the seed was given to her by one of the people who works with Dave Tifford of Fantastic Gardens of Long Island on one of his visits, and asked her customers for feedback.