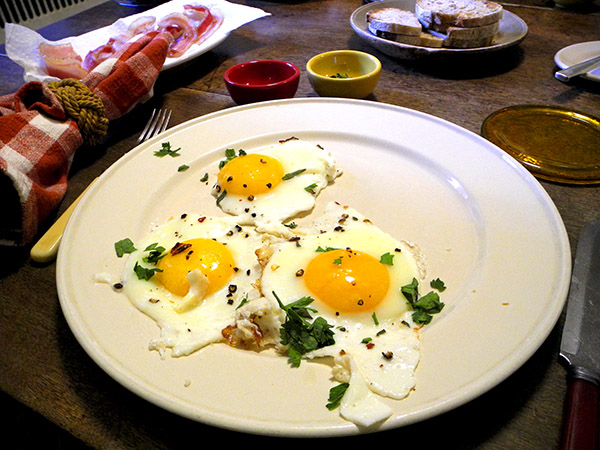 We rarely have anything but a pretty basic breakfast, even on weekends, probably because we already get up so late that we don’t want to put off the day any more than we would already have by then. But sometimes a breakfast can’t really be thought of as ‘putting off the day’.  This one, of bacon, eggs, toast, and a few trimmings, was very much part of our day this past Sunday, and it turned out to be a super one (breakfast and day).  Besides, we started our Sunday so late that we didn’t have to steal from it later in the afternoon with a proper lunch, even if we suspected we would not start to eat dinner until after ten o’clock.

I love eggs, at any time of the day, and in any form, but I usually just can’t leave them alone without some device – or devices.  In this case it meant herbs and spices, some only a little more exotic than others.

The herbs inside the yellow cup in the picture above were a mix of parsley from John D. Madura Farm, thyme from Phillips Farm, oregano from Rise & Root Farm, plus tarragon and winter savory, both from Stokes Farm.  The spice in the red one was some crushed very complex-flavored and highly-pungent ‘India Special Extra Bold’ Tellicherry peppercorns (“Special refers to longer maturation on the vine, the extra bold refers to larger size.”) by Penzeys Spices.  After the picture was taken I also included a container of whole peperoncini from Buon Italia, crushed.

The salt was Maldon.

Both the eggs and the bacon (thick, country-style) were from Millport Dairy, in the Union Square Greenmarket, and the European-style (more butter fat) butter was ‘Kerrygold Pure Irish Butter, Unsalted’, with 12g (18%) total fat, from Westside Market on Seventh Avenue.

The toast originated as part of a loaf of 7-grain bread from Eataly.

After preparing the condiments, the first thing I did was to heat the bacon very slowly in an enormous cast iron pan, which meant that less fat had accumulated after it had been cooked, and I fried the eggs in most of what had remained, reserving the rest for use in another meal. Barry, the toastmaster, began his duties just as I removed the bacon from the pan.

One tradition however that we observe every Sunday is starting off the day with music that is somehow ‘Sunday-ish’, at least in the Christian tradition. It’s a tradition from which each of us fully emerged, alive, thank goodness, long ago.  The choice of this music is made not out of nostalgia, but rather for the opportunity to listen to a part of the Western world’s great musical canon which is insufficiently represented in concert, and to listen to it in [at least a part of] the context for which it was originally written.

For me, the earliest form of this tradition began in Europe in 1961, when I first lived outside the U.S. and had ready access to live classical music performance, churches included.  In Munich, two years later, now a fully-confirmed atheist, I often went on Sundays with one or more friends to listen to music performed inside one of the shiny-new recently-restored great Munich churches, my aesthetic senses now proudly – and perhaps sadly – free of the veil of religious devotion (although understanding the powerful symbiosis of the two).  There we could listen to singers, a chorus, and a real orchestra performing some of the world’s most glorious (although even then becoming increasingly esoteric) music inside the kind of great spaces for which it was intended.  This sort of experience is not easily found in New York City today (and likely never was); when it is, there is usually an admission price involved.

Yesterday at home, with a bow to Beirut and to Paris, we played a recording of Gabriel Fauré’s ‘Requiem’.