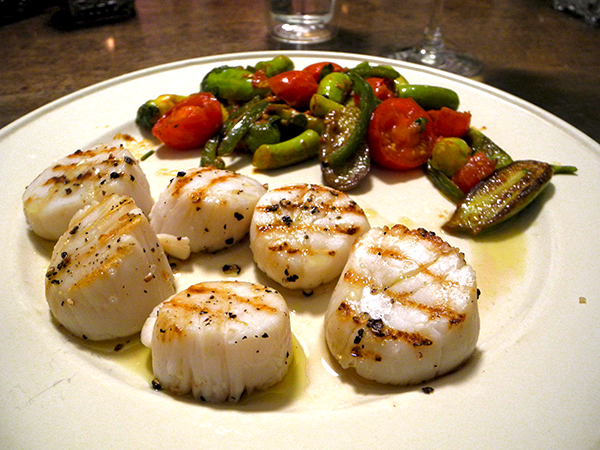 Note to self: The vegetable side dish may be difficult to recreate, since I’ve never before come across tromboncino (or zucchetta), but it was at least a terrific one-off, and a great companion to the excellent fresh scallops.  Keep a sharp eye out for this vegetable.

I really did splurge a bit, although unintentionally, in ordering twelve scallops for the two of us.  Eight would have been sufficient (a number which would have cost only about about $11.50 at today’s market price), but they made for a great meal, and I have to admit that there was very little else to accompany it, even if that very little else comprised a superb dish.

My preparation of the vegetables was an adaptation of this recipe, which I found on line while searching for information on the squash itself.  Tromboncino, or  zuchetta, goes by many names, but it is an heirloom form of zucchini, and it apparently originated in Liguria, making it, I thought, particularly suitable as an accompaniment to the seafood I had chosen for the meal.