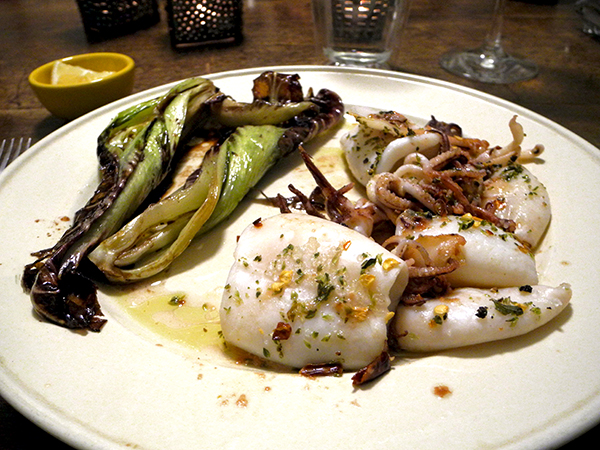 a wonderful pairing, even before the wine was poured

The meal was a treat, and had I not purchased all the ingredients myself, I might have had a hard time believing that all ingredients together probably set me back only 11 or 12 dollars, and that’s for two people!  Even considering that it was a dinner prepared at home, the figure is pretty incredible, although absolutely verifiable.  The squid cost $6.50 (and had I wanted to clean them myself, it would have been only about $3.25), the treviso was less than half that, and the oil, lemon, balsamic vinegar, dried oregano, dried chile, salt, and pepper just might have brought the total up to the figure I mentioned above.

This is one of the reasons why we can afford to eat out in New York, at least once in a blue moon. Perhaps ironically, this time the seafood itself was actually from the ‘Blue Moon’, to be specific, Blue Moon Fish.  Exactly who’s irony was involved, I can’t say, since I don’t know the story behind the name Alex and Steph gave to their little blue-hulled fishing boat). 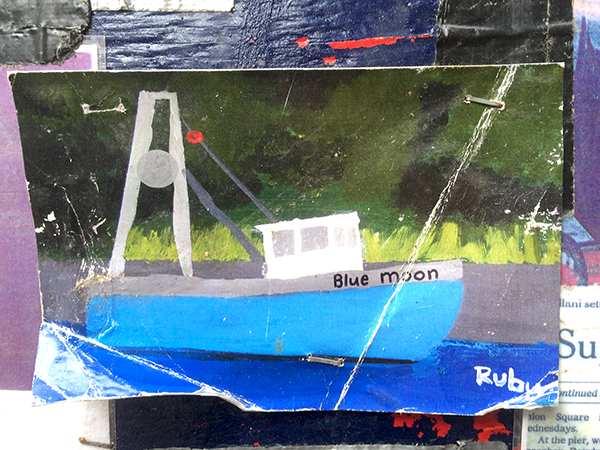 Ruby’s rendering, of the ‘Blue Moon’, spotted on the bulletin board of her family’s Greenmarket stall