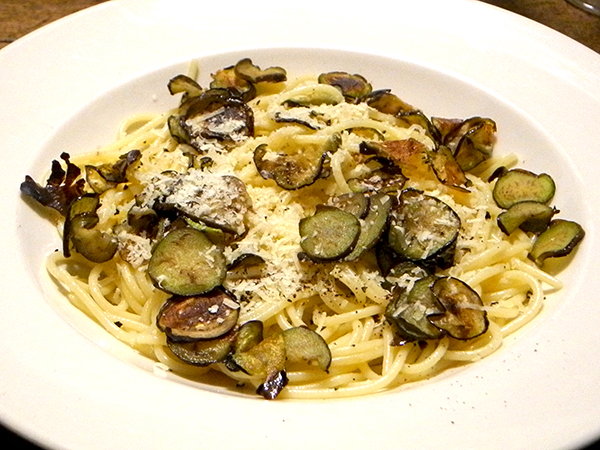 There could hardly be a simpler meal than this one.  In addition, few could be easier to make, if it weren’t for the amount of attention needed to see that a large number of simple eggplant ‘coins’ are properly  cooked before they’re tossed with an extraordinarily good artisanal pasta.

I found the very minimal recipe many years ago inside a magazine article describing half a dozen simple pasta dishes. It was described by Fred Plotkin as the inspiration of Signora Francesca Pantonocito, relayed to him by her daughter Laura.

I can’t find anything on line about either Pantonocito, so I have noting else to share, except one very useful tip, from the recipe’s author, that zucchini could well be substituted for the eggplant.  Normally I’d be tempted to suggest adding mint in either case, but this formula is absolutely perfect as it is, so long as a very good pasta is used.