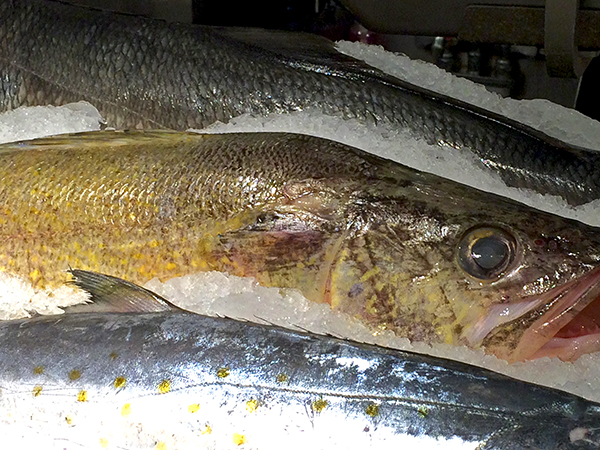 it’s called a ‘walleye’ (they also sell it whole, here Spanish mackerel below, bluefish above); 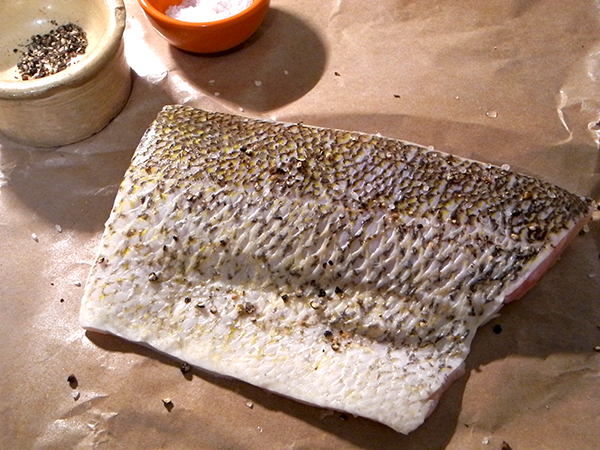 on our kitchen counter, seasoned, ready to be floured; 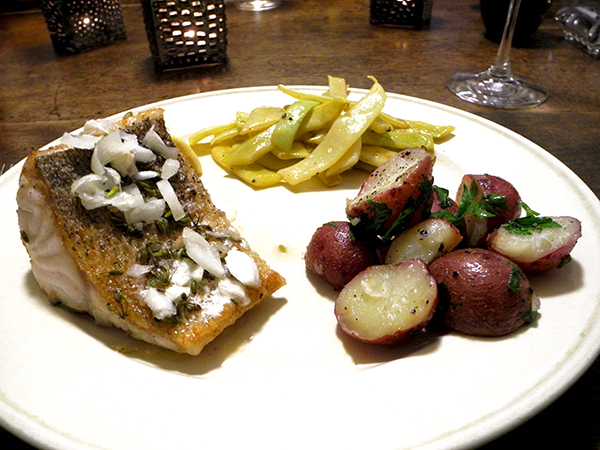 and on the plate.

While growing up in Michigan and Wisconsin, I thought of the walleye, or ‘walleyed-pike’, or just ‘pickerel, as a very big thing, virtually the subject of fable, and not just because Algonac, where our turn-of-the-20th-century porched cottage sat on the St. Claire River, is the home of the nonpareil Algonac Pickerel Tournament

.  To tell the truth, I was actually always much more excited by the scary Muskellunge, or ‘Muskie’.  It was a catch which might have been more elusive, but their angry bared-teeth heads were everywhere, mount-it-yourself trophies hung above the garage doors (or in dens) of successful pursuers, much like the antlers which land hunters, who also sought out size (numbers of ‘points’ on ‘racks’), still display to invite the admiration of their peers.

But me, I stuck with perch and sunfish.

That’s the background for my excitement five years ago when I found, while visiting The Lobster Place, a small sign for and display of beautiful white fillets of ‘pike’, specifically, ‘wild West Virginia pike’.

Looking on line, I’ve just learned that the Chain Pickerel [Esox Niger], so named because of its scale figuration, is an eastern variant of the pickerel, found in all kinds of  waters, in West Virginia probably most notably in the main channel of the Ohio River.  It seems that it was this pike that I first took home from The Lobster Place.

Lately the Chelsea Market shop has been showing pike labelled, ‘wild: Great Lakes’.  The fish guy told me he thought it came from Wisconsin waters, but he wasn’t certain.  For sure I can go with Wisconsin; it’s where my parents’ families have lived for nearly 200 years, and Grandfather Wagner’s farm there bordered Lake Michigan; it’s also where I spent parts of many summer vacations (when we were not in Algonac),

The American pike is very close to the European ‘zander‘, or ‘pike-perch’, which we’ve enjoyed as very special treats in Germany.

Last night we enjoyed it at home in Chelsea.