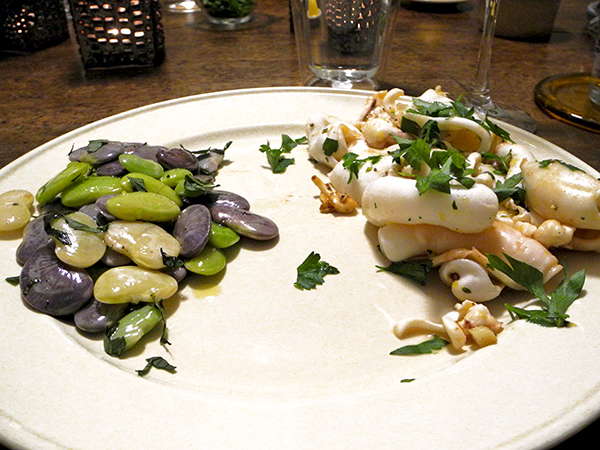 I actually was a little disappointed that the lima beans didn’t retain the hues they showed when they first came out of their pods (see below), but the earth and woodsy tones of their river stone disguises pretty much made up for it.

I was new to cooking this ancient South American vegetable as a fresh ingredient, having limited myself until now almost exclusively to working with its frozen form, and that was decades ago.  When I picked them up at the Union Square Greenmarket I thought preparation would be a cinch, but once home I found almost nothing about limas (or butter beans, an alternative name for the legumes) in any of my cookbooks and, as I was interested in something minimal, almost nothing useful on line.  To illustrate my dilemma, one site outlined at least three major steps for extracting the bean, and a cooking process that would have stretched on far beyond an hour’s time.  It was only when I turned to my half-century-old copy of  Craig Claiborne‘s classic opus, ‘The New York Times Cookbook’ [$25 new here; $10 to $15 here, at Strand], that I was finally reassured about both the ease and the simplicity with which these delicious beans could be prepared.

Both peas and beans can vary in size, tenderness, and freshness, so it may not always be easy to prescribe cooking times or amounts to buy (especially when they are being purchased in the shell or pod), and there is also the question of individual tastes. Claiborne’s short entry reads, simply, “Place the [shelled] beans in a small amount of boiling water, cover and boil rapidly until tender, about twenty to thirty minutes.” [Note: I checked the beans while they were boiling, and ended draining them after something closer to fifteen minutes]  He advised allowing two pounds – or more – for four servings.  I bought a pound of unshelled beans, and that would have been more than enough for the two of us, except that they were so good; even as little as half of a pound might have been enough if there were another vegetable on the plate.

I decided to do little to interfere with their natural flavor, but, in addition to some olive oil, I did go for the addition of some chopped mint (Claiborne had suggested butter and thyme), and, naturally, a squeeze of lemon, perhaps thinking the three might convert the very American lima bean into an Italian dish.

One more thing.  Squid remains one of the least expensive of any seafood available today;  the cost of two generous servings was far less than the cost of this excellent vegetable (a price I was totally happy to pay, even before their goodness had been fully confirmed and enjoyed).

The pictures below show the beans as they appeared at the Greenmarket, and then as they looked after podding and before cooking. 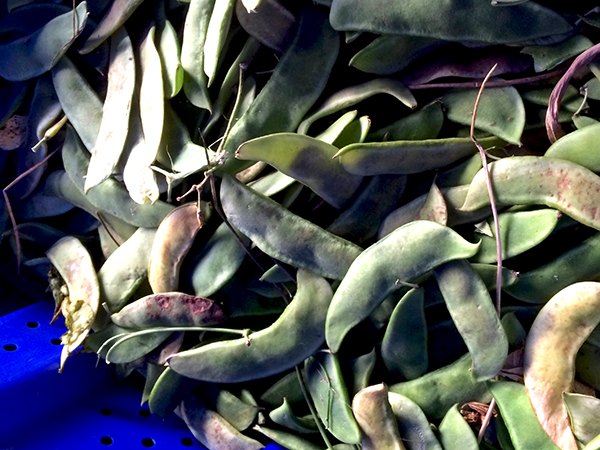 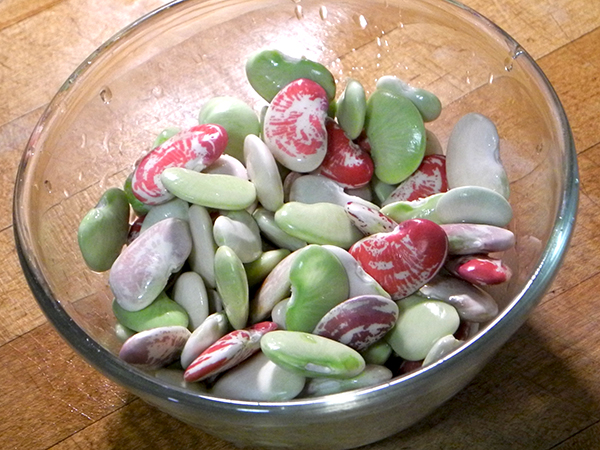