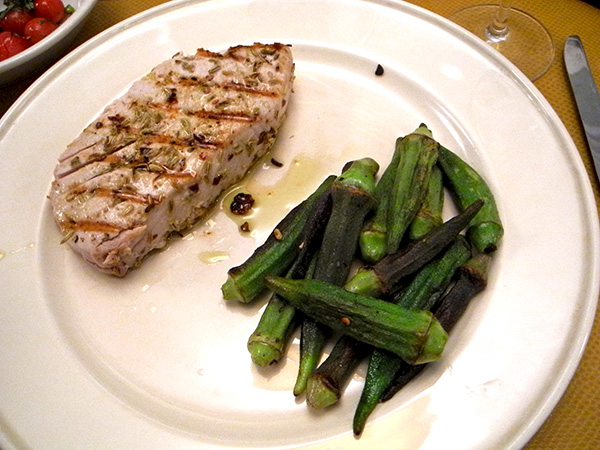 It was to be four of us for dinner. There would be the same number of courses, but only one of them required any real cooking, and very little cooking at that.  The kitchen therefore never had the chance to heat up (although, since we ate in the dining room/gallery, I suppose it wouldn’t have mattered much anyway).  Also, while normally I have difficulty interacting with guests as I would like to while cooking, I really knew my way around each of these four plates, so I was able to invite everyone into the kitchen area while I was still working on them.  Yay!

I really recommend these ‘recipes’ to anyone who might have the same entertaining parameters.

Also, the meal was delicious; the main course featured two of my favorite things, they were both incredibly fresh (probably caught and picked the day before), and they were prepared in just about the simplest way possible.

The tuna, which followed a serving of Speck and greens, was prepared using Rose Gray and Ruth Rogers‘s simple recipe; the very basic treatment of the okra was a suggestion I had come across somewhere long ago; and the intentionally un-spicy cherry tomato salsa was another simple treatment, my own invention. 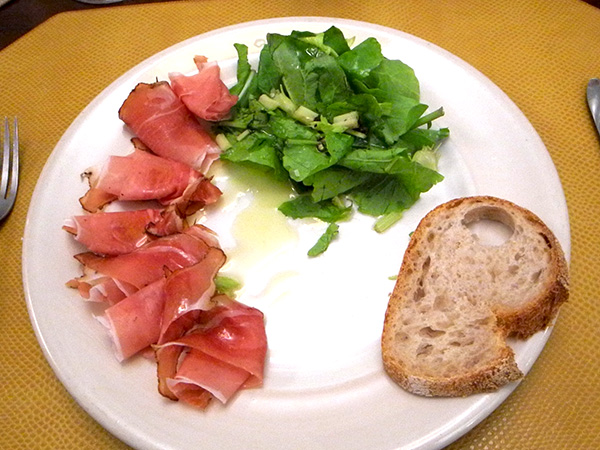 Speck has become one of our favorite antipasti.  For some reason it always makes me feel it’s part of a festive occasion, and this time it genuinely was, since we were sharing it with good friends, and they had thoughtfully brought along a bottle of an excellent Austrian sparkling wine (this is probably not the right time for me to bring up the historical connection between the Südtiroler Speck and the country in which the Grüner Veltlinger Sekt was produced).  I served the salumi with a very good bread and a bit of arugula (as it turned out, too small of a bit, so I added some celery leaves I had on hand).

After the tuna, there were three regional cheeses (‘Manchester’ and a special late-season ‘Danby’, both goat cheeses from Consider Bardwell Farm; and ‘Brebis Blanche’, a sheep cheese with a coating of ground mixed pepper, from 3-Corner Field Farm), served with thinly-sliced ‘Rustic Classic’ from Eataly, toasted.

The dessert was some of Berried Treasures’s celebrated strawberries (the breed a mix of domestic and wild), topped with a scoop of Madagascar Vanilla Ciao Bello gelato, with a sauce composed of a few of the berries which had been macerated a bit with Toschi Orzata Orgeat syrup spread over the ice cream and garnished with chopped hazelnuts.