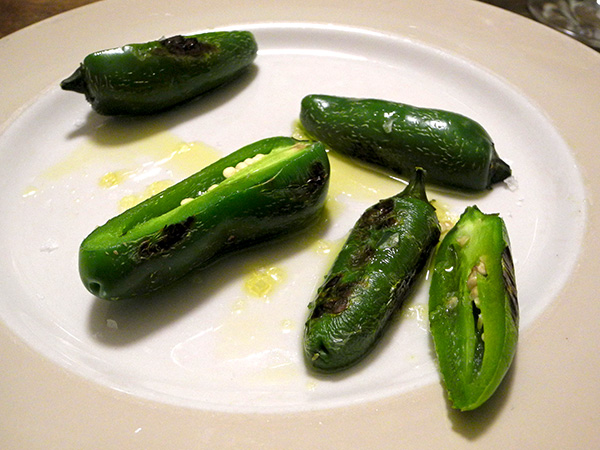 Well, that was invigorating.

I had been told that these Jalapeños could be safely consumed alone after they had been sautéed until they blistered, something in the manner of Shishitos or Pimientos de Padrón, but without the gamble.  They were given to us by our gentlefolk weekend farmer friends, who assured us that they weren’t actually hot (maybe it was something about the strong yanqui ‘microclimate’ of the area north of New York where they were grown).

Barry and I aren’t wimps when it comes to the hotter representatives of the capsicum family, but these peppers upstaged our experiences with the most unforgiving batch of their cousins, the ones which you can count on being hot only ten to fifteen percent of the time. It was [almost] fun while it lasted, and, as I said at the top, they did get our attention.  In the end however we couldn’t finish them, especially as we were worried we wouldn’t be able to taste the main course.

HOUSEHOLD HINT: How to cool your mouth after a pepper assault?  I know this is totally anecdotal, but I got almost nothing else to give:  Try putting a little salt on your tongue, following up with some cold water.  It worked for us this time, even before we reached into the freezer for some cold sorbetto (which worked as more of a palate cleanser than ever on this occasion). 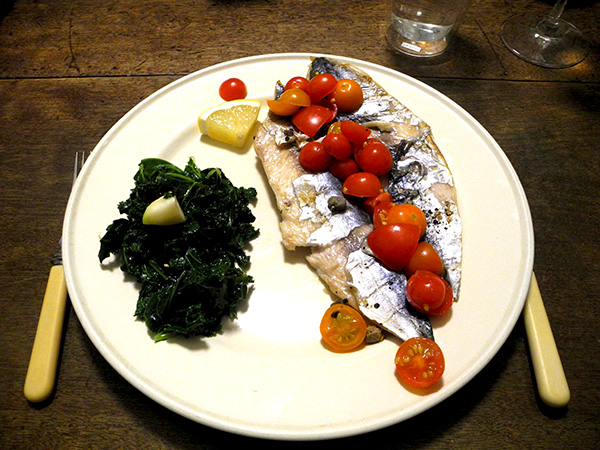 The entrée, served about twenty minutes later, was soothing, and without incident.  It was a recipe which I have come to depend on (perhaps too much however; I’m going to have to do some thinking about alternatives).