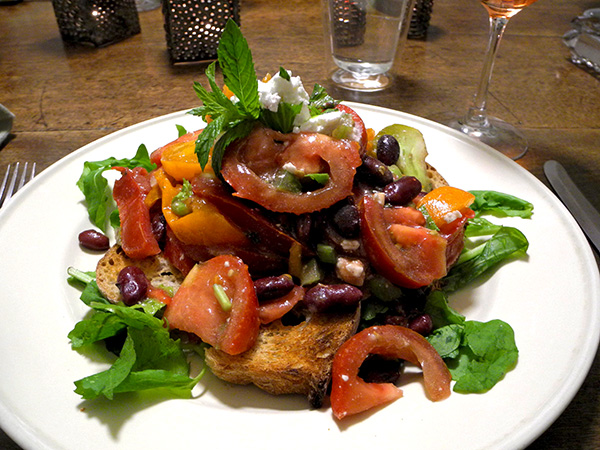 When I was growing up, Friday was fish day.  We were in the midwest, far from the sea, but we were surrounded by the Great Lakes, and it was the 40’s, so the great and the less great waters were still able to support, just for starters, perch, bass, pike, white fish, lake trout, lake herring, smelt, sturgeon, and all kinds of bass.

I now live in New York and, because of the glorious ocean bounty of the fisher folk who set up stalls in my local greenmarket, fish day is now Monday, Wednesday, Friday, and Saturday, every week of the year, except for those days on which I’m unable to get to Union Square.

On the days in between, while I will sometimes serve meat, I prefer to put together a dish in which vegetables have a chance to shine, although usually assisted by some form of pasta, eggs, rice, or other sympathetic medium.

This Tuesday evening the medium was bread, or toast, to be precise, and it was very good toast.  I had a chance to try a recipe which had originally attracted me because of its tempting, and very seasonal ingredients, and also, at this time, because it would include a good number of the heirloom tomatoes I had been recently accumulating on the north windowsill.  There was also the added attraction, on a very warm evening, of the fact that it could be assembled with no heat whatsoever.