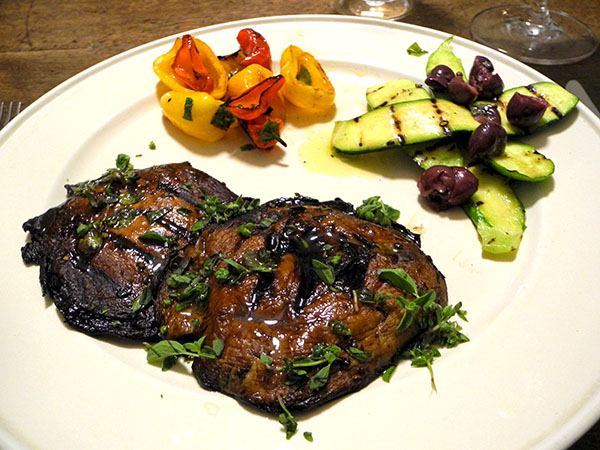 It’s not red, and it’s not even meat, but it sure is scrumptious.

I’m not really trying to engage specific food categories with these dinners; I actually just like variety. This time the meal wasn’t just vegetarian, but genuinely vegan, although, had a carnivore not been informed in advance of the nature of its components, a guest might have easily been oblivious of that fact.

Regular visitors to this blog know that it’s not about meat, so when I talk about meat substitutes it’s not so much about me.

I’ve always laughed at the idea that vegetarianism may too often involve the fabrication of dishes which imitate animal flesh, as in so many boring tofu configurations.  If you can’t get to a good South Indian restaurant, or if the objective is Western-like food with the suggestion of meat rather than the real thing, grilled portobello mushrooms would do it, and there is absolutely no nonsense or fakery, or a strain on the environment.

I always knew that mushrooms, and these mushrooms in particular, can easily evoke both the appearance and the taste of meat, but without the mess, or the perhaps a bad conscience, but I really haven’t done much to demonstrate it to myself, or anyone else – until now.  This was a delicious, totally satisfying dinner on every level.

Additionally, there is real convenience for the cook, because each of the elements of this meal is equally as tasty whether served at room temperature or warm, making it a perfect summer prescription.

Now if I could just find a mushroom to evoke the appearance and the taste of seafood…  Oh, wait, there’s the Oyster mushroom.  That will just have to be another Food Blog outing.

The wine with which we accompanied it was a very special discovery we made during our Québec trip two months back.  ‘Special’, also, for still being totally invisible on line.

We had tasted Maurice Dufour’s surprisingly good white (surprising only because of the far northern latitude of its origin), a Muscat, while we were in Charlevoix in June, but we had not enjoyed his newest offering, a red, until Barry suggested we try it with this meal. The Le Charlevoyou was an excellent companion to the slightly quirky seductions of the vegetable plate.  If we were asked to describe the wine in the most general terms, we would both probably say something about it’s resemblance to a Bordeaux.

This is a link to a beautiful short video from ‘La Famille Migneron de Charlevoix’, whose first and primary occupation is the production of some excellent cheeses; there are images of the vineyards beginning almost half of the way through.

Yes, I know Norway has vineyards too, and it’s much closer to the North Pole, but the Gulfstream doesn’t come even close to Baie-Saint-Paul.

We’re now looking forward to Dufour’s rosé, one bottle of which we had also brought back from our visit to that beautiful province.