All of these three [very different] courses were entirely vegetarian.

I’d call each of them a succès d’estime (there were only the two of us to bear witness, so I can’t make say there was any more general acclaim).  Most of the credit goes to the freshness and quality of the ingredients, and the simplicity of the treatments.

The frittata involved a little more procedure than the other two courses, which helps to explain how I slipped up at one point, failing to execute one step at the point when it was indicated. I think however that I made a recovery which might have actually improved a recipe with which I was already taking some liberties with its prescribed herbs;.  It certainly made it appear more complex – and more colorful as well:  The instructions were to introduce into the bowl of whipped eggs, just before they were poured into the pan, the portion (half) of the tomatoes which had been chopped and mixed with garlic, but I missed my cue.  I had no choice at that moment but to spread them on top of the large slices of tomato which I had already spread on top of the eggs once they had begun to cook.

Thinking that the hot broiler might do terrible things to the small pieces of tomato and garlic lying on top of the frittata-to-be, I reached for my container of homemade breadcrumbs and sprinkled some on top, just before slipping the pan under the broiler.

It seemed to work, although I’m not sure the breading precaution was at all necessary.

The frittata was incredibly juicy and delicious; I think it might well have been the best one I’ve ever made.

The dessert was determined pretty much by the perfect ripeness of some white peaches (my favorite) which I had kept on the windowsill for two days, and some additional tasty delights I had on hand.  I hadn’t thought of it as quite as Spanish-ish as the rest of the meal, but, looking back at the ingredients, I think I might be allowed to push the attribution 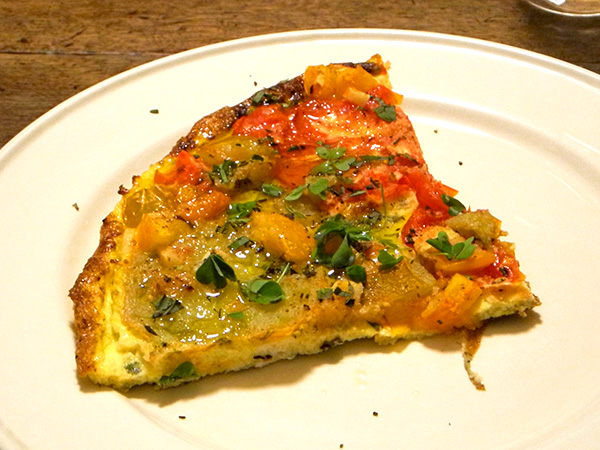 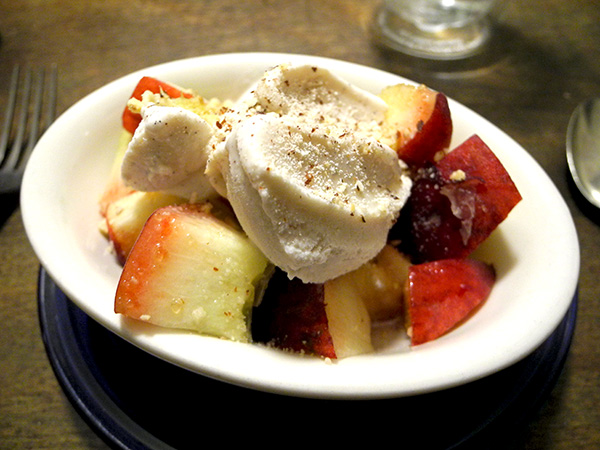