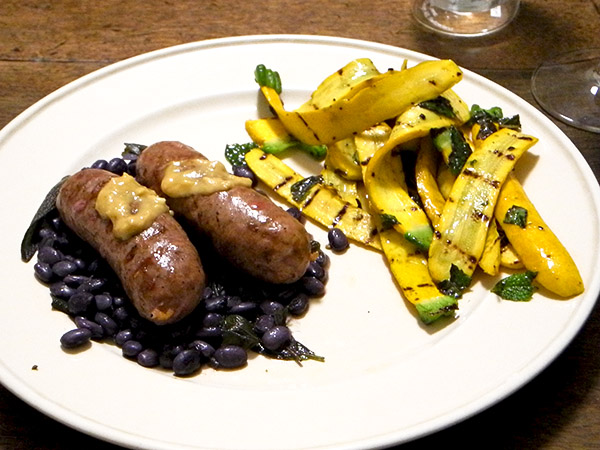 Not vegan.  But very good, and the vegetables were much more than just supporting stars.

I had gone to Eataly to pick up a loaf of bread, and some mint.  The night before that, Friday, we had enjoyed fish, and the Saturday night I found myself at Eataly there would be a totally vegetarian pasta on the table.  I knew I wouldn’t be able to pick up fresh seafood for Sunday’s dinner, so I had been thinking of defrosting a small amount of meat, either a duck breast or two lamb chops, for the two of us.  I hadn’t committed myself to either, and I suppose I had left myself open to being distracted by the bounty I knew awaited at our almost embarrassingly-blue-ribbon local Italian food outlet.

I bought some sausage.

Barry had recently mentioned that locally-sourced sausage might be an attractive alternative to our more usual entrées, so when I spotted the little sign inside the meat display case which read, ‘wild boar sausage’, which also included information on its origin, it felt like it was a natural.

My next assignment was to figure how to combine it with the very specific supply of vegetables I had available.  I was still improvising up to the moment I plated the sausage and the vegetables, but I think I did myself proud, and I was surprised that I was able to come up with what seemed like a fairly Italian meal in the end.